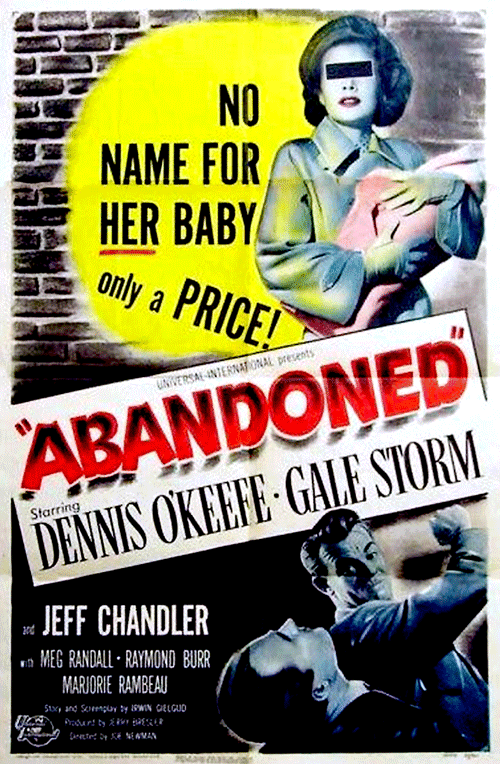 It’s jarring to experience a classic era film that deals bluntly with an issue that remains controversial sixty years later. Message pictures such as Abandoned serve up a healthy reality check for those of us who are easily entranced by the plastic sheen and fake nostalgia of typical Hollywood studio fare.

In postwar Los Angeles, the dime-a-dozen girls who arrive in droves are like cattle to the indifferent denizens of the City of Angels. Abandoned explores just one of the many ways that those girls are treated like a cheap commodity — to be exploited, discarded, and forgotten. Abandoned what? Babies. This is a film about the money that can be made by taking newborns from their terrified mothers and sold quietly to the childless rich. The young mothers themselves? What’s one more Jane Doe in the city morgue book?

Although the setting is never mentioned by name, the opening credits of the film run over a nighttime backdrop of L.A. City Hall, accompanied by a narrator’s familiar admonition that what happens in Abandoned can happen anywhere in the United States. Abandoned could be called an exposé film, but from the outset it is placed visually and thematically smack within the universe of film noir. The story opens with Paula Considine (Gale Storm) entering the missing persons bureau to file a report on her sister, who fled to L.A. to have an illegitimate child far away from judgmental eyes. The male lead, cynical reporter Mark Sitko (Dennis O’Keefe) is the first character to encounter Paula Considine upon her arrival at City Hall. Sitko’s presence is never explained, but when he sees Considine he’s attracted more to her legs than her sob story. That’s the extent of his initial concern. To him, she’s a naïve yokel, and in his zeal to make some easy time he can barely restrain himself. He doesn’t cool his jets and offer to help until he realizes that her trouble might make for a news story.

The heavies in Abandoned are sleazy private investigator Kerric (Raymond Burr) and his employer, elderly Mrs. Donner (Marjorie Rambeau). Donner is easily one of noir’s most cold-blooded villains; she’s an intriguing variation on the femme fatale. She speaks of murder and the sale of human flesh with a casualness that even gives Kerric pause. The girls she exploits are merely “units” of stock to be killed and discarded, along with their babies if necessary. And make no mistake, Mrs. Donner is certainly aware of Little Lindbergh and the ‘short walk from the cell to the gas chamber.’ It’s her Nihilistic attitude that makes her enterprise all the more shocking, and distinctively noirish. She acquires victims by handing out free bibles at ‘wayward girls’ hospitals, along with promises of things coveted by the young and afraid: money, nice clothes, and kindness. Her veneer of respectability and class accentuates the depth of her evil: an old woman with a cane, motherly, cultured, and wealthy. The notion that danger and evil lurk just underneath the surface in someone who might be your neighbor or grandmother is truly frightening.

In the tradition of many noir films, the plot of Abandoned is intricate and convoluted. The story zips along on the strength of sharp dialog and good direction. Director Joseph Newman does a fine job of creating atmosphere and building suspense from the opening shot of city hall to the expressionistic finale. William Daniels’ cinematography deftly weaves striking exteriors of L.A. with more stylishly contrived set pieces and almost-invisible rear projection. The climactic scene, an intricate sequence staged at a dark and deserted construction site, is a definitive visual expression of film noir. This is a fine contemporary film in a beautiful sixty year-old package.