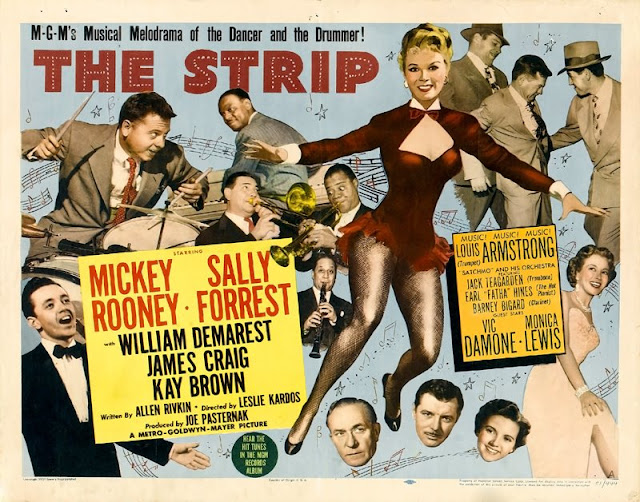 An existential film noir musical? The Strip is one of those pictures that is more interesting for what is says about the values of its era than it is as a piece of entertainment, despite MGM production values and a big-time star. Billed as “MGM’s musical melodrama of the dancer and the drummer,” the film opens with ample noir flair: a narrator speaks over a long shot of an urban landscape. In this case it turns out to be the Sunset Strip, as a police prowl car rolls through the breaking dawn, siren blaring. The scene cuts to a low shot of a girl’s body lying in a pool of blood, phone cradled in an outstretched hand as the cops look in through a distant doorway. Cut once again to more cops rousting a young man from his bed, and then sweating him in the interrogation room. It sounds a bit more hard-boiled than it actually is — especially considering the youth is none other than cute-as-a-button Mickey Rooney. We find out that a man is dead, and the girl is barely hanging on. The cops are looking for the Mick to shine a light on the situation. Queue the flashback. 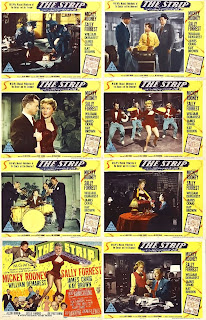 Mickey is Korean War vet Stanley Maxton, who upon his release from the veterans’ hospital moves to Cali in order to find work as a drummer in one of the big L.A. clubs. En route racketeer Sonny Johnson, played by James Craig, forces Stanley’s jalopy off the road. Sonny’s girl gives him the guilt-trip, so he offers the Stan a job at his sports-book in order to make amends. Two hundred scoots a week is too much to turn down, so Stan signs on and quickly makes good as a bookie. He still yearns to bang the drums though, and ends up sitting in with Louis Armstrong’s group one night at Fluff’s bar. Fluff, played by a world-weary William Demarest, offers Stan the seat on a permanent basis, and begs cigarette girl Jane, played by leggy Sally Forrest, to help him seal the deal — which works like a charm when Stan falls hard. He takes the drumming job to be near Jane, but she’s not interested. She has stars in her eyes and is only interested in those who can help her with the studios. Sonny takes bets from plenty of movie hot shots, so Stan thinks he’ll score points by getting them together. Sonny takes the girl for a ride and never lifts a finger to get her a screen test. Knowing the score, Stan threatens Sonny and takes a beating for it. He runs to Jane, who has a climactic, but unseen, confrontation with Sonny, resulting in his death and her sprawled out. The flashback concludes, bringing the scene back to the interrogation room. Stan confesses to the murder in hopes of saving Jane, but she’s way ahead of him, getting it all down in writing from her hospital bed, just before her lights go out permanently. Distraught, Stan returns to Fluff’s where he bangs through an up-tempo number as the end titles appear.


A word or two about the music: The Strip, which received Oscar nominations for Best Music and Best Original Song, has at least ten numbers woven into the story — ensuring its status as a legitimate musical. Consisting primarily of jazz numbers featuring Armstrong’s band, which here includes Earl Hines on piano and Jack Teagarden on trombone, there are also some popular songs, sung by the likes of Monica Lewis and Vic Damone. Owing to the musical nature of Rooney and Forrest’s roles, the songs fit in nicely and in a few instances help move the story forward. Along with the music we get a birds-eye view of some of the brightest nightspots on Sunset Boulevard, including Ciro’s, The Trocadero, and The Mocambo Club — all considered the height of chic to 1951 audiences. The Strip uses that omnipresent movie-land device of showing a montage of neon signs, one fading into the next, to suggest a full night of drinks and dancing. 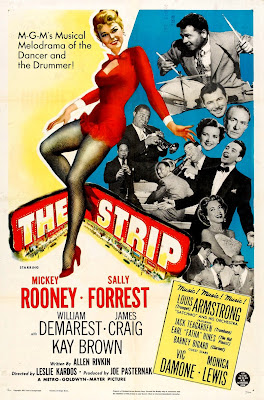 Despite the fact that the film is a sort of hybrid musical / crime picture, it most definitely scores as a film noir. It’s evident in the extraordinarily anonymous characterization of Jane. She's something of a femme fatale, but that isn't what makes The Strip a noir. In fact, it might be more appropriate to think of her as a human Macguffin. The film purposefully makes no effort to develop in her any personality or notion of likability beyond her good looks — in fact her looks are her character. It isn’t so much that her personality is likable or not likable — she just exists for no other reason than to move the narrative forward. It’s often said that soldiers in combat fear getting to know replacements, because they don’t tend to last long. The Strip paints Jane in such a light: Why get to know her? Who really cares? She’ll either make it or she’ll go home, but either way she won’t be here very long. That’s how it is with these girls that Fluff calls “career crazy.” She needn’t even have a name — instead of Jane she could simply be known as “the girl.” This archetypal treatment (though admittedly a certain nuance of archetype is required for a Rooney picture) reminds me of Hill’s 1978 film The Driver where the characters, each a noir cliché, are actually called “the detective,” “the driver,” “the player,” and so forth. We never learn why Stan falls for Jane, or why a big time player like Sonny would give her the time of day. Instead, Fluff sagely discourages Stan and reminds him he’d do better to find a girl who didn't have stars in her eyes. The movie actually gives us such a person in the form of Edna, hatcheck girl and wannabe songbird. Edna is smitten with Stan from the first time he enters the club, but he shows as much interest in her as Jane does in him.


The film’s final statement is so full of a stark existential bleakness that more than anything else it establishes The Strip as a film noir. Following the news of Jane’s confession and subsequent death, Stan returns to Fluff’s. As he makes his way toward the stage he passes Edna, who has climbed one pathetic rung on the ladder: she’s out of the cloak room and sporting Jane’s lacy cigarette girl outfit. In no time at all she’ll be singing with the band and thinking of Stan as a little fish. He notices her, as if for the first time, as he slumps onto his stool at the drum set and begins to bang out a rhythm. In this sublime moment, the film gives us a frightening vision of Hollywood: There will always be a new girl — the buses are laden with them and one is just as good as the next. Jane was just another star-struck wannabe who didn’t find her dreams in tinsel, and now she’s dead. Why should the film bother to tell us anything about her? It’s another night at Fluff’s, and Satchmo is on the stage. Jane is easily replaced and forgotten by all she those knew. The drummer remembers her, but he’s lost in the music.