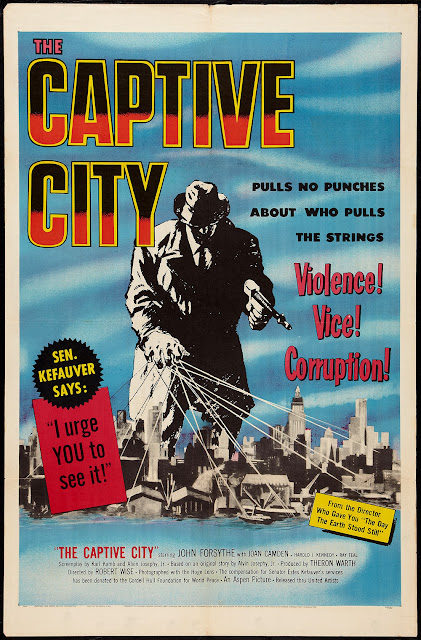 The story is told through flashbacks, and features the kind of opening sequence that was fairly common for the exposé pictures of the day. This one finds the senator from Tennessee, Estes Kefauver, speaking directly to the audience. Kefauver warns ticket buyers to be on guard, and that organized crime is an ever-expanding enterprise from which not even the most rural communities are safe. (Ironically, Kefauver didn’t get much traction as a racket buster, but he sure kicked the stuffing out of the comic book industry.)

On a superficial level, The Captive City is concerned with the obstacles Jim Austin must overcome to root out the corruption taking hold in his town. But where the movie scores as a film noir is through its cynical depiction of the townspeople and their willingness to accept organized crime as part of their daily existence. Austin is a man apart. The town’s lethargic response to his clean-up efforts doesn’t come from fear of mafia violence or shakedowns, but instead from the community’s acceptance of gambling and graft as a necessary—in some cases welcome—part of modern life. The story’s take on the banality of cynicism in postwar America is one of the most unusual in all of film noir.

Ordinary townsfolk keep telling Austin to mind his own business: his business partner, advertisers, cops, and even his wife, after she’s confronted in the street. His pup photographer takes a beating, and only then does the boy’s mother decide to give Austin a piece of her mind. The film does very little to dispel the general attitude that crime is an inescapable fact of modern life, as common as a newspaper tossed into a thorn bush or flies getting in through the screen door. Inevitable, but only annoying.
Surprisingly, the film boasts just a pair of murder victims, two supporting characters who come forward as potential whistle-blowers, both conspicuous in how the movie presents them. Both are outcasts, the most maladjusted townspeople in the movie. The first is a broken-down and discredited investigator who takes divorce work in order to keep the lights on; the other is the drunken ex-wife of the city’s chief bookie. The gray milieu of noir asks us to carefully examine their motives. Are they concerned citizens who care about their civic duty, or are they revenge-seekers with an axe to grind? Regardless, it is made clear that the collective inability of these “misfits” to conform to the community’s general culture of malaise is what really gets them killed.

Although at its heart The Captive City is an exposé picture, its bleak world view, extraordinary cynicism, and pervasive malaise make it an important film noir. There isn’t a moment in the picture that shows the negative effects of corruption on the citizenry. The only characters who suffer harm are the ones that stick their necks out. This unrepentantly bleak outlook is reinforced at the end, when the viewer is surprisingly denied the chance to share in Austin’s ultimate success. When he finally arrives in Washington DC to testify at the senate hearings, we are denied admittance to the chamber—the door is quite literally slammed in our face. We are even begrudged the small pleasure of seeing the gangsters who doggedly chased the Austins across the country get what they deserve. They melt back into the crowds, forgotten by the film and by law enforcement. The film refuses to give us a Hollywood ending, even though (for once) we really want one. Instead we are left with Kefauver, who offers a final message so hollow that it would suck the air out of any would-be do-gooder: that in the wake of his efforts to protect his town, the real Jim Austin is out there somewhere, anonymous, but “still alive.”

One final note: It’s worth pointing out that poster for The Captive City, a film that deals with the Italian mafia, clearly anticipates the artwork of the dust jacket and movie poster for The Godfather by almost twenty years.