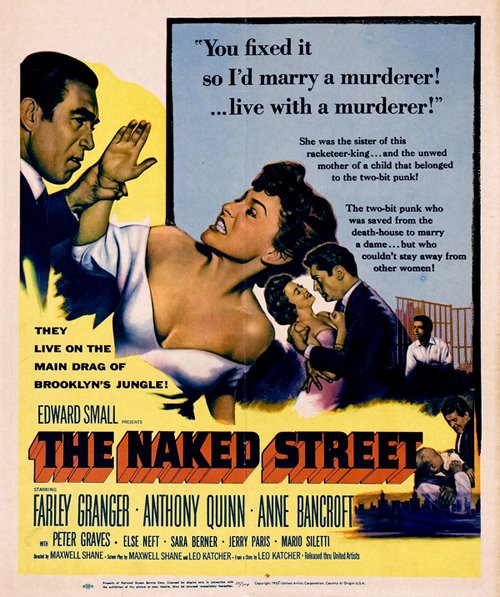 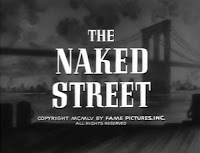 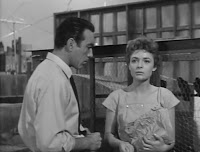 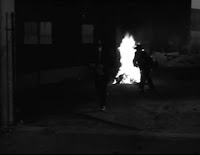 The first time I saw the 1941 Greer Garson film Blossoms in the Dust I was surprised that Hollywood could manage an entire production (not to mention one with four Academy Award nominations) about the crusade to have the word illegitimate removed from birth certificates in the state of Texas. Apparently back then, the stigma was enough to handicap the unfortunately labeled child for life. No jobs, no education, no inheritance. There are countless films from the golden era of Hollywood that use scandal (and what characters will do to avoid it) to create dramatic tension. Scandal may be the most utilized filmic mainstay of Hollywood’s golden age that has since lapsed from contemporary film.

In The Naked Street, mob enforcer Phil Regal (Anthony Quinn), who regularly has men beaten and killed, is so frightened of the idea that his knocked-up kid sister Rosalie (Anne Bancroft) might have to raise a bastard child, that he fantastically engineers the release of her beau from the death house at Sing Sing. It is positively stunning to consider that audiences would empathize with the idea that a hardened, violent killer would go to such means to protect his sister and her child from the whispers and smirks of square-type citizens. The young hoodlum and father of the child, one Nicky Bradna (Farley Granger), is currently awaiting the big zap for knifing an elderly clerk during a bungled liquor store heist. Regal hires the best lawyer in New York and intimidates key witnesses into rethinking their testimony just so Bradna can beat the rap and make an honest woman of Rosalie. This outrageous hogwash is what makes The Naked Street so interesting, but the filmmakers’ failure to follow the melodramatic possibilities to the finish make it something of a disappointment.

As the story unfolds the plot twists turn over on themselves. Rosalie loses her baby and Bradna steps out on her, leading Regal to decide that the kid is expendable. He endeavors to have a jewelry fence killed in order to frame Bradna, sending him back to the death house. With the kid back in the big house the movie goes from hard-boiled to preachy. The narration provided by crusading reporter Joe McFarland (Peter Graves) begins to dominate, and the dialogue jumps from melodramatic to overtly socially conscious, especially as Bradna’s date with sparky gets closer.

The film’s only hope lies in making good on the outrageous promises of its first hour—yet it fails to do so, slipping into banal commentary on the justice system. The tension subsides and the denouement becomes obvious and perfunctory, thanks in part to very blunt foreshadowing. A film of this type simply can’t start on one trajectory, no matter how unbelievable, and end on another.

Quinn is typical Quinn in The Naked Street, but pretty boy Granger gets to play a bit tougher than usual. Make no mistake, his Bradna still a naive patsy in The Naked Street, but not to Quinn’s Regal, or even to fate. By 1955 film noir had begun to point at an unjust social and governmental bureaucracy as the latent source juvenile delinquency. It’s the system that is to blame here — Bradna isn’t asked to pay, like Burt Lancaster a decade before in The Killers, for some mistake made long ago. Instead, he’s the unfortunate victim of a social order that has begun to accept gangsters and everything wrought by organized crime as a necessay evil, an everyday aspect of American life. Bradna’s character just doesn’t matter; he’s reduced by an editorializing McFarland to “a victim of the slums, a victim of the rackets, a victim of himself.”

One final note: From time to time I’ll get a sneaky suspicion that no one associated with Leonard Maltin’s Classic Movie Guide has actually seen one of the films reviewed. Their one-sentence review for The Naked Street reads as follows: “Capable cast wasted in bland yarn of reporter exposing crime syndicate.”