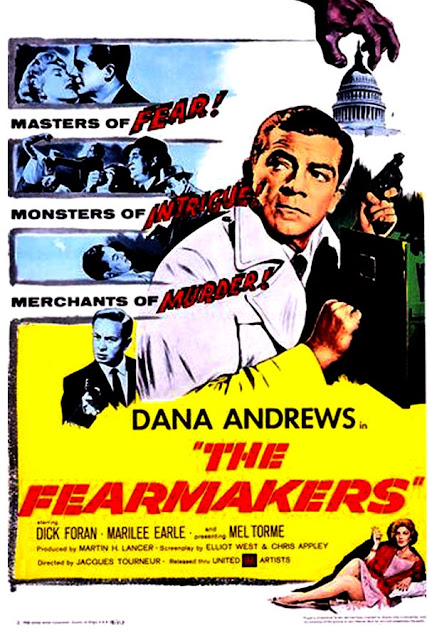 Dana Andrews is one of the more iconic actors of the film noir cycle, yet in the grand scheme of things he’s one of the most underappreciated in film history. The image of him standing amidst the hulking carcasses of bombers at the end of The Best Years of Our Lives is so viscerally powerful that the thought of brings tears to my eyes. I’ve always admired him as a “film first” kind of guy, meaning that he never allowed his ego to get in the way of his characters. “Low key” for him wasn’t a vapid Hollywood actor’s false modesty; it was his personal way of exploring character and demonstrating faith in his audience’s ability to empathize. He was a fairly regular Joe who suffered through the ups and downs of life as most people do, though it can be argued that he had more than his share of bad luck. That he struggled mightily with alcohol in the years after his career began to decline isn’t surprising—less was known of alcoholism in those days when the evening cocktail was an intrinsic part of American culture. It didn’t help that in 1935 he buried a young wife, and then in 1964 their child. He worked as he found it in his later years and died without fanfare in the early 1990s. His body of work is extraordinary, and it’s easy to imagine that his screen persona was probably not much different than the man in real life.

Oddly, one of the roles for which I best remember him is as Ted Stryker from 1957’s Zero Hour!. In the film, famously lampooned in Airplane!, Andrews plays a neurotic WWII fighter pilot who can’t get past the guilt he feels over the deaths of his squadron members. Years later, Stryker gets his shot at redemption aboard a commercial flight that is bedeviled by food poisoning. (“Don’t order the fish!”) The film depicts Andrews as a shaky, sweat-drenched wreck—he may even be a coward. But by the final fade-out he’s a hero—albeit a reluctant one. You leave thinking that had anyone else been able to fly the plane, Andrews would have kept his ass strapped in row F. Even as the flight crew asks if anyone on board has flight experience, he keeps quiet. It isn’t until his ailing son volunteers that his “pop flew in the war” that Andrews grudgingly acknowledges his personal history. The guy in the control tower is, of all people, Sterling Hayden. The hulking actor browbeats Andrews through his ordeal until the plane alights on the tarmac. Even then, Stryker is denied that moment of movie heroic adulation that eighties action film heroes were willing to destroy block after city block to achieve. Instead of a rousing ovation, the distressed passengers seem joyously relieved that a schmuck like Stryker didn’t get them all killed. The film’s treatment of Stryker is lukewarm and ultimately disappointing, yet Andrews brings the role the same level of professionalism and dignity evident that defined his career.

Shortly after Zero Hour! Andrews and director Jacques Tourneur made two films together, The Night (Curse) of the Demon—which everyone and his ma has seen—and the obscure The Fearmakers, a communist exposé picture situated in the world of DC lobbyists and public relations firms. Andrews plays Alan Eaton, an old-school PR executive who believes his firm’s primary function is merely to ascertain public opinion—not manipulate it. But Eaton has been a prisoner of war in North Korea for the past few years, relentlessly beaten and tortured. The opening credits roll over top of one of his beatings, and the film’s first real scene takes place on Eaton’s flight back to the States. It’s here that he meets a “fellow traveler,” nuclear physicist Dr. Gregory Jessup, who preaches nuclear disarmament and warns Eaton that PR companies have begun to manipulate public opinion far more often than they reflect it. He cites as an example how the big tobacco companies have begun to employ PR firms to help them explain away medicine’s claims that cigarettes are the cause of “certain malignant ailments.” Jessup just so happens to be looking for a good PR man and asks Eaton for his contact information.

Let’s pause for a second. The close-read of this scene is that Jessup is a communist—the fact that he’s stumping for disarmament is a dead giveaway. This notion has confused some who have commented on this film in recent years, as if the filmmakers are suggesting that anyone with a “no-nukes” bumper sticker must be a Red. These folks fail to grasp that Jessup’s position doesn’t suggest that communists are peace-lovers who despise nuclear power—it’s merely the movie’s way of showing the audience that he’s a clever liar. The film’s actual attitude however, if viewed through the lens of the late 1950s, makes a great deal more common sense. Jessup really wants to use Eaton’s PR firm to spread a no-nukes message, so that the communists can speed ahead of the United States in the burgeoning arms race. Remember that nuclear stockpiling was only just beginning in earnest, and that American views about the defense program were by-and-large pro-nuke, and not yet as fatalistic as they would become in subsequent decades. That’s an attitude the Soviets would have liked to change. After all, this was the atomic age. In the minds of many, the Fat Man and Little Boy detonations had saved the lives of thousands and thousands of US servicemen; deeper implications allowed by the passage of time weren’t yet part of the public consciousness.

In the same year The Fearmakers was in theaters, the Ford Motor Company was fervently developing a nuclear-powered concept car, complete with onboard reactor. The excess of the buildup was still in the offing, and the “bomb” remained an essentially American concept. When The Fearmakers debuted the Soviets had possessed nuclear capability for only eight years, and lagged behind in the associated technology. Even by 1964, the US held in reserve 7,000 warheads to only 500 for the Soviets. The truly frightening concept of remote delivery hadn’t yet taken hold either, though in October of ‘57 the Russians would deploy Sputnik via the first functional ICBM, changing attitudes forever. With all of this in mind, Jessup’s pitch to Eaton is a logical ploy: let’s get a respected American PR man to sway public opinion in the direction of disarmament, while in the meantime we secretly catch up to the US in the arms race. Of course communists would want to sow the seeds of disarmament in America—and Andrew’s Eaton is perfect for the job: he’s naïve, rattled, and has possibly even been programmed to be sympathetic by his North Korean / Chinese captors.

It also seems to be a plot contrivance of the first order that Jessup would happen to be on the same plane as Eaton in the first place, but we later learn he’s a plant. As it turns out, Eaton’s former business partner died under mysterious circumstances just after exercising his power of attorney and selling the their PR firm to a third man, Jim McGinnis (Dick Foran), an unscrupulous, greedy chap. McGinnis in it for the money and doesn’t care much who he works for or what political agenda he asked to spin. The film’s depictions of the PR racket falls well short of its clever take on the DC attitudes that find their locus in the vicinity of Connecticut Avenue and K Street. (Take my word for it, I paid my dues there in my early twenties. The only thing I remember with any fondness is the “L Street Chicken” sandwich at Jonathan’s Gourmet Deli.) Despite the fact that Eaton and Baker is one of the most respected agencies inside the Beltway, nobody seems to actually work there. McGinnis’ only employees are right hand man Barney Bond (played like a weasel in coke bottle glasses by crooner Mel Tormé) and secretary Ms. Dennis (amateurish Marilee Earle). The empty office is likely a product of the movie’s low budget, but it requires Tormé and Earle to pull their weight, and both fall short. Earle in particular is far, far out of her depth.

Eaton of course knows none of this—he expects to return to the company that he built from the ground up and resume his old life. Instead he gets hit by a ton of bricks: not only is his former partner long dead and gone, despite seeing that his name is still on the door, he’s shocked to discover that the business has been sold out from under him. (McGinnis kept the name for the strength of its reputation) McGinnis recognizes that Eaton still has some juice, so he offers him the chance to “write his own ticket” if only he can secure the account of a senator whose business was lost when McGinnis took over. Eaton agrees, but when he meets with the senator and a reporter friend, they give him the dope on who McGinnis really fronts for.

Horrified, Eaton becomes an impromptu double agent and works to bring McGinnis to justice. Why? Because his name is still on the letterhead, and in his mind that makes him responsible for whatever the company has become in his absence. And although Eaton endured hell in Korea he’s still compelled somehow to do the right thing. Yet not surprisingly, he decides that as soon as he can untangle this mess he’s getting out of the DC rat race and heading for an easier life in California. Eaton has no desire to return his company to its former level of respectability—he knows a lost cause when he sees it. The Fearmakers wraps up with a series of conventional movie run-ins with colorful communist agents in various guises, and all’s well that ends well. The end titles find Eaton and Ms. Dennis necking at the feet of Abraham Lincoln.

As much as The Fearmakers can be praised for being conceptually ahead of its time, its fails to understand that not all criminal enterprise is violent. The movie is about how politicians and the power-hungry conspire to corrupt the truth, yet the notion must have been deemed too obtuse for 1950s audiences, because in the end the filmmakers reduce the crooks to mere thugs with fists and guns.Though, more importantly, it could be that those 1958 audiences were still clinging to a make-believe world where a lone good man could trumpet down the walls of Jericho. My god, how the world has changed.