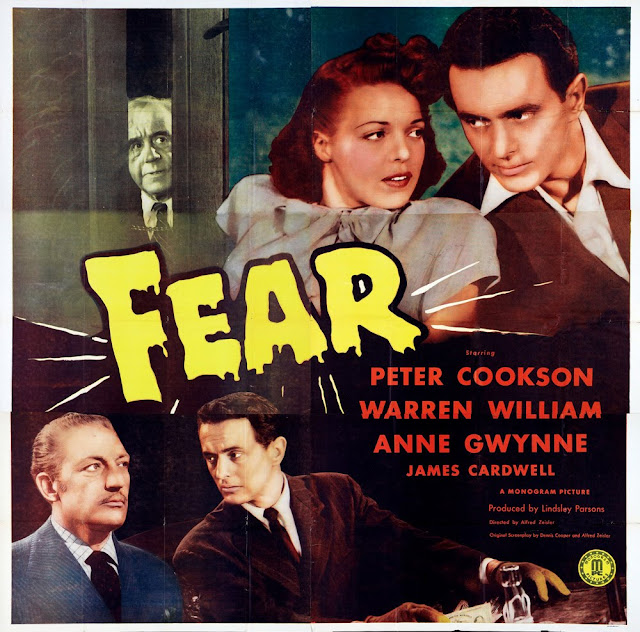 Released by Monogram in 1946, Fear is film noir’s take on Dostoevsky’s Crime and Punishment. It’s a little-remembered movie that has all the flaws typical of a Poverty Row production, including a low budget, a less-than-stellar ensemble, and a swiss-cheese storyline. However in spite of those limitations it’s also an inventive, exciting, and thought-provoking little movie. It takes that famous narrative: man desperately needs money, man commits murder to get it, man’s life falls apart — and embroiders it with a series of story developments that are either surprising, inexplicable, or just plain weird. What makes the film truly fascinating is the final plot twist, which leaves viewers wondering if the whole thing was intended to be a tongue-in-cheek gag. Whatever else it might be, Fear is put together with unexpected panache, and the results are as pleasing as they are mystifying.

Peter Cookson stars as medical student Larry Crain. (Fear is his only legitimate leading role, though he was notably married to Poltergeist actress Beatrice Straight for forty years) The opening scene finds a morose Crain in his shabby one-room flat, sodden over a bizarre telegram from the medical school: “Circumstances beyond our control compel us to discontinue all scholarships.” Of all the set-ups in film noir this is one of the most absurd. As an academic of many years, I can assure you that the chances of a school being compelled to ‘discontinue all scholarships’ is pretty far out there. However in Fear, baffling developments are par for the course. Wait and see. 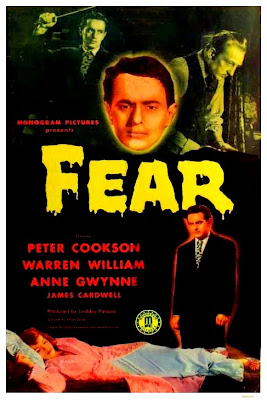 Compounding his troubles at school, Crain’s landlady Mrs. Williams (the ubiquitous Almira Sessions) seems to live outside his door, incessantly badgering him for the rent. Desperate to scrape together even a few smackers, Larry shambles over to see professor Stanley, who teaches at the medical college but makes extra money moonlighting as a pawnbroker. Larry’s lone valuable is his dead pop’s engraved watch, for which the old man offers just a sawbuck. Stanley adds insult to injury by withholding two dollars to cover the vigorish on previous loans. Though it seems a bit too convenient that Stanley must open his wall safe in order to retrieve a measly eight clams, it gives Larry the chance to scope out the wads and wads of cash camping in the professor’s strongbox, as well as a heavy set of brass fireplace tools by the mantle. Larry gets the impulse to kill the professor then and there, but resists. However he’s so enamored by the idea that he walks home in a daze.

Cue the girl. With his eight bucks in hand Larry grabs a stool and a hot meal at the local hangout. He spends more than expected when he has to buy coffee for a girl who appears to have everything in her purse except loose change. The money is happily spent however, when Eileen (Anne Gwynne) agrees to a date. Romance blooms, but as far as the movie is concerned Eileen doesn’t much matter. She gives Larry someone to talk to so the audience can know what he’s thinking: Larry believes that any crime is excusable providing the ends justify the means. What other films accomplish through voiceover narration, Fear provides by giving the protagonist a conversation partner.

Following his encounter with Eileen, Larry returns home to more bad news: a huge tuition bill and an ultimatum from Mrs. Williams: pay up or hit the bricks. He immediately recalls the professor’s strongbox, and decides to do the deed. The strongest segment of the film is the murder sequence, which takes place in Stanley’s tenement house. Director Alfred Zeisler amps up the tension, beginning with Larry’s ascent up the apartment building’s stairs, wary of a black cat lurking along the way. At one landing he pauses outside a flat that is being painted. The painter shimmies his ladder from one spot to another without climbing down, like some grotesque insect on stilts. This interlude turns out to be important rather than just absurd; the painter and the freshly painted room shortly become critical story elements.

When Larry finally rings Stanley’s bell, the academic is reluctant to admit him, considering that the younger man was just there the previous evening. Larry offers a wrapped and tied package that he claims contains a silver cigarette case, though in actuality it’s just a cheap glass ashtray from his own drab room. As the professor struggles to open the bundle, he chastises Larry for wrapping the damn thing so tightly. In a moment where the script really comes to life Larry apologizes, dolefully saying “I’m sorry” as he bends over, unseen by the professor, to pick up that heavy fireplace poker. We don’t get to see Larry land the killing blow — once the camera leaves his strained face, it shifts to capture the prof’s trembling hands as he struggles with the bundle. It’s in this expressionistic moment, and a few others like it, that Fear really scores as a film noir. Just as the wrapping paper finally falls away and Larry’s ruse is revealed, the blow is struck and the ashtray drops, shattering the old man’s glass of port, which spreads against the white table cloth like so much lifeblood.

Larry escapes the murder scene, barely, and makes it back to his room where he passes out, to be roused later by a detective who takes him in for questioning — his engraved watch makes him a suspect. The man in charge of the investigation is the jovial Captain Burke (Warren William, so rakish and debonair that he must think this is a Lone Wolf picture). The two play cat and mouse with each other for a while, until Larry’s mind begins to unravel under the strain. A brief but excitingly expressionistic montage finds him once again wandering the streets in a daze, assaulted by visions of nooses and other portents of death. Fate leads him to a train yard, where he barely avoids being struck by an onrushing locomotive. This brush with death convinces Larry to confess to Eileen — who inexplicably decides to stand by him. He returns home to find Captain Burke waiting to show him the morning’s headlines: the painter from the second floor apartment has confessed to bludgeoning Professor Stanley! Burke clearly stills believes that Larry is the murderer, but in light of the painter’s confession Larry overcomes his conscience and keeps his mouth shut. Nevertheless, in film noir neither fate nor justice can be thwarted — Fear climaxes as an ebullient Larry is struck by a car and killed as he rushes to reunite with Eileen.

Hang on a second. Cue the harp music and the swirling vortex — Larry isn’t dead after all, he was just dreaming! Instead of lying dead in the street we find him lying in bed, yanked from a deep sleep by someone knocking at his door. It’s Professor Stanley, except this time the dear fellow wants to give Larry a loan to tide him over until his scholarship check, thankfully restored, arrives in the mail. As a bewildered but carefree Larry leaves his room to a brighter day he bumps into Eileen in the hallway — except her name isn’t Eileen, it turns out to be Kathy. She’s tracked him down to pay back his sixty cents, and has decided to take a room at Mrs. Williams boarding house as well! Once again, for the first time, Larry makes a date with the girl, and in a moment of Vertigo creepiness asks if he can call her Eileen. Unfazed, she remarks that he “sure must have been in love with that girl!” To which Larry replies, as the screen fades to black and the end titles, that someday he’ll “tell her all about it.”

The ending of Fear is frustrating and silly, though it still begs an interesting question: Why take a film that already closes well and tack on a coda sure to leaves audiences wagging their heads? Maybe to extend the running time: there are several passages in Fear that suggest Zeisler was stretching for length rather than tension. Or perhaps to give viewers a surprise to talk about as they waited for the A-feature to begin. Poverty Row films were usually as derivative as they were low-budget, and Fritz Lang’s The Woman in the Window had been a hit with a big twist. It’s also clear that Zeisler was enamored of Lang — he was working in the German film industry just as Lang was making his best films. The dreamy denouement, along with a clever smear of white paint on Larry’s jacket strongly argue that Zeisler was paying homage to an admired fellow filmmaker.

It’s also fair to suggest that Larry Crain’s imaginary death, steeped as it is in the relentless fatalism that defines film noir, is only obvious to contemporary audiences as the best spot to close the movie. In 1946, audiences were enamored with the psyche, and the psycho-neurotic dream conclusion would have pressed some topical buttons. For my part, I can only explain Fear’s eyebrow-raising oddities, its plot holes, and its bizarre twists, its general balderdash, by asking: Who says dreams have to make sense?