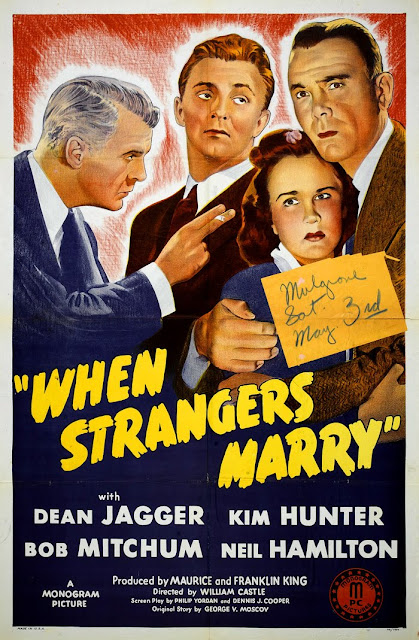 By 1944, with the war in Europe raging away, the mania for quickie marriages at home reached alarming levels. Such whirlwind couplings were explored in many Hollywood films at the time. In Vincente Minelli’s 1945 romance, The Clock, Robert Walker and Judy Garland meet, fall in love, and wed over a two-day pass; while in Cromwell and Selznick’s 1944 Since You Went Away the effects of such a marriage resonate throughout the lives of a Midwestern family; and most famously in William Wyler’s masterpiece The Best Years of Our Lives Dana Andrews and goodtime-girl Virginia Mayo discover what life is like for such a couple after the war has ended. With prestige studio productions such as these dominating the screen, it seems inevitable then that a B-crime picture would come along and explore what can happen when two people who barely know each other tie the knot. The result is When Strangers Marry, an exciting little thriller that delivers as much suspense as one could ask for in an hour. Although the film is one big riff on a quickie marriage, understandably missing is the war. The story hinges upon the suspicions of a young wife, and had any of the suspects been servicemen the movie never could have been made.

Released by Monogram in 1944, re-released three years later as Betrayed (owing to Robert Mitchum’s rise to stardom), and directed by a young William Castle, the film benefits from the grouping of an incredibly talented cast and crew, all at the outset of what would be long and significant careers. In spite of all this talent the film’s biggest drawback (as was typical of Poverty Row productions) was the script — which is frustratingly cooked-up and calls for a great deal of suspension of disbelief. You’ll see the denouement coming a mile away, but fortunately When Strangers Marry has a lot more going for it than Philip Yordan and Dennis Cooper’s screenplay. Yordan, who was notorious in Hollywood for grabbing writing credit whether it was rightfully his or not, and who would go on to write such films as Dillinger, The Black Book, and The Big Combo seems difficult to blame, though it’s perplexing to consider that the author of the brilliant House of Strangers, and an Oscar winner for the Western remake Broken Arrow, also penned the “ice-skating noir” Suspense. (For more, read Alan K. Rode's fascinating article on the enigmatic Philip Yordan here.)

In addition to Castle, Mitchum, and the reliable Dean Jagger, the film stars twenty-one year old Kim Hunter in just her third picture. The future Oscar winner had already been featured by directors Mark Robson and Edward Dmytryk in her first two films, and she does quite well when asked to carry this one. The movie’s runtime is admittedly brief, only 67 minutes, but Hunter dominates — featured in practically every scene beyond the first. She plays Millie Baxter, a young wife who gets a great deal more than she bargained for after hitching to Paul (Jagger), a traveling salesman she’s only just met. The story shadows her to New York in search of her man and a longed-for new life in the Big Apple. There’s been a vicious murder though, and all signs eventually point to Millie’s mysterious and inexplicably absent hubby. Millie is joined in her search by old boyfriend Fred Graham (Mitchum), who despite a veneer of cool seems a bit too interested in the affairs of her marriage. The story takes us down a circuitous and contrived (to put it mildly) pathway that ends with dramatic flair and a MacGuffin that Hitch would have been proud of. 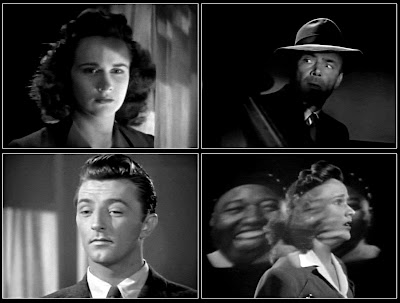 Whatever When Strangers Marry lacks in narrative power or dialogue it more than makes up for in style, direction, and charisma — though admittedly by invoking the word style I don’t mean to imply MGM gloss. After all this is still a Monogram product. (However, one aspect that is beyond reproach on any level is the Dimitri Tiomkin’s brilliant music.) The movie has touches that are often expressionistic and occasionally surreal; yet compelling as they are they only accentuate the uneven, disjointed feeling of the whole. I’ve never considered myself a particularly ardent fan of William Castle, but I do get really excited about any film in which a young director works through his material with inventiveness and verve. Castle’s tight pacing and ability to create tension are present, and he and his salty cameraman Ira Morgan give the film a few truly memorable moments. The most visually and psychologically noirish of the bunch happens somewhat early in the film, as Millie finds herself alone and unable to sleep in her Manhattan hotel room shortly after arriving in the city. As she stands by the window of her room her face is alternately swathed in darkness and then harshly lit by the neon dancehall marquee that dominates the space outside her window. The effect has been used many times, but Castle knowingly employs it to exaggerate the phobic tension of Millie’s dilemma. The same can be said of a later moment when the heroine wanders the midnight streets of SoHo, and finds herself in a nightmare of her own making as the gigantic grotesque faces of other characters leer down at her from her mind’s eye. The sequence is jarring and effective. Much of Castle’s early film work involved projects such as this, where he utilized film noir visual style to elaborate upon his character’s psychological disposition rather than to simply embellish a scene or obscure cheap production values.

Like other such films of the early forties, When Strangers Marry is more prototypical than typical in its use of noir traits. Some viewers will dismiss it as not-quite-a-noir due to the lack of key signifiers such as a male protagonist or a femme fatale, while recognizing that the visual look and feel of the film varies wildly from scene to scene. Yet as mentioned above, Castle and crew score big points for the careful way in which they employ visual style, which is done in some moments as subtly as it is obvious in those detailed above. For example, pay close attention to the camera set-ups used to film the two male leads — both are photographed with specific ‘rules of engagement’ — that evolve as our senses of the characters change. The film is also boasts psychological themes that are highly identifiable with noir: the isolation and loneliness of Millie, the neurotic and paranoid deterioration of Paul, and Fred’s cool cynicism. And while none of these traits are as pervasive, and the film owes something to the mystery tradition of the previous decade and a something else to Alfred Hitchcock, it still offers an exciting viewing experience and an offbeat expression of early film noir.

When Strangers Marry, aka Betrayed (1944)