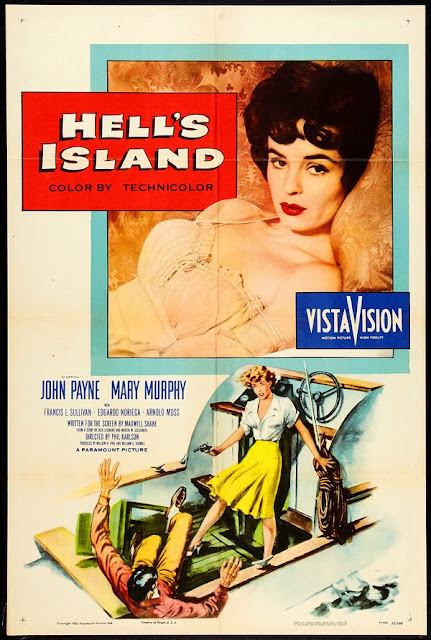 One of the rewarding aspects of studying film noir is discovering the inventive ways in which filmmakers created exciting and stylish movies in spite of obstacles such as low budgets, less than perfect casting, and cut-rate set design. Of course there are a few iconic noirs that got the A-list studio treatment, but those have never been of as much interest to me — or the focus of these essays. I dig the B-stuff: the ones that show verve, made by people who seem a bit manic, as if they desperately have something to prove and not enough time to do it. One of the best of these is 99 River Street, which I’ve written about here and at Noir of the Week. Directed by Phil Karlson and starring John Payne, that picture about a gritty brawler who gets a second chance is truly one of the most visceral and exciting of all the B-noirs. Therefore I approached the pair’s third and final film together, Hell’s Island, anticipating something special. Yet unlike 99 River Street or Kansas City Confidential, this one does not deliver the goods.

Hell’s Island is a bona fide film noir, but not a good one. Made towards the end of the cycle in 1955, it’s as if the film is self-aware enough that it is trying to be a film noir. Yet its attempt is wholly unoriginal, and the elements that comprise the narrative are nothing but a pastiche of shallow character types, plot devices, and generic clichés lifted from other films — demonstrating nothing except that by this point in time film noir was wheezing. There’s even a deadly pit of alligators and, a la The Lineup and Kiss of Death, a wheelchair plummet! The story is of a drunken ex-district attorney who gets drawn into island intrigue when he is offered five large to head for Santo Rosario in search of a stolen ruby. Payne is Mike Cormack, the man hired by enigmatic foreigner Mr. Barzland, played by Francis L. Sullivan (doing his best impersonation of a diabolical Sydney Greenstreet). Barzland chooses Cormack because of the former lawyer’s relationship to Janet Martin, the woman believed to be in possession of the stone. Cormack and Martin had been shacking back in Los Angeles, and Cormack drank himself out of his job when Martin gave him the heave-ho for some slick Latin-type with a fatter wallet. He takes Barzland up on his offer in hoping to see the woman again and exact some revenge. As the story unfolds we realize that no one involved is telling Cormack the truth, particularly Janet Martin, and that by the time Mike manages to work it all out he gets shot, beat up, and harassed by everyone from Barzland’s alligator-raising cronies to the local police. As a matter of fact, and in true noir-checklist fashion, the story is related via flashback and with the help of first-person narration — the action related entirely while Cormack lies bleeding to death on a hospital gurney. By the time the thing wraps up most viewers will be bored — having figured it all out reels and reels ago.

It’s almost a worthwhile exercise to watch Hell’s Island for the sake of naming all of the movies from which it lifts elements. The movie is so hackneyed and derivative that its lack of originality becomes its defining characteristic. Don’t for get that even the film’s title is uninspired: Hell’s Half-Acre, a not dissimilar effort, had been released less than a year before. The movie’s biggest claim to noir-status comes in the form of Mary Murphy, who plays femme fatale Janet Martin. Murphy was fine as the sweet little teeny in The Wild One, but she drowns in this more grown-up role. She tries her best to channel Jane Greer, but all Murphy really has to offer is a pretty face and a nice pair of hands — she does most of her scenes smothered in Payne’s arms, trying awfully hard to look sultry while giving the big fella a back rub. The script pegs her as a black widow from the start and Murphy just doesn’t have the chops to make us feel remotely sorry for Janet, or even aroused by her. In the end we just don’t feel anything, which is as damning a criticism of her Murphy as can be given. A femme fatale isn’t a femme fatale if there isn’t a male character that falls for her, and Cormack fits the description. Even he gets wise after a while though, it just takes him a bit longer than the rest of us.

Although a whopping five writers are credited, the screenplay for Hell’s Island is primarily the work of Maxwell Shane, a noir writer-director with a great name but limited reputation. Shane developed the script from a story by Martin Goldsmith (Detour). It would be easy enough to lay the blame for the movie at the typewriter of either man; but in Phil Karlson we have the man who not only directed 99 River Street, but Scandal Sheet, The Brothers Rico, and the highly underrated Tight Spot. Cameraman Lionel Lindon, who would win the cinematography Oscar the following year for Around the World in Eighty Days, is simply awful here. Filmed in Technicolor, Lindon disregarded the power of light and shadow, especially when illuminating dingy back lot sets. There are even a few moments in the film when a shadow obscures the face of the character delivering lines, and the results are embarrassing — and carelessly accidental. We can define film noir as a marriage of visual style and themes, but the choices made by cinematographers, lighting technicians, and set designers must serve the narrative. Lindon and Karlson use straightforward setups and middle-distance shots more indicative of television than a feature film. Missing are the offbeat angles, the claustrophobic close-ups, and the moving cameras that are emblematic of thoughtful film noir.

Hell’s Island is a rare film (only 40 IMDB votes), though for once this isn’t a film that anyone but a noir completist should endeavor to track down. It’s uninspired, poorly made, and would have looked a great deal better in black and white. Actions scenes that end with a guy falling into a pit of alligators normally make a film worth watching, on Hell’s Island it’s only good for a laugh.