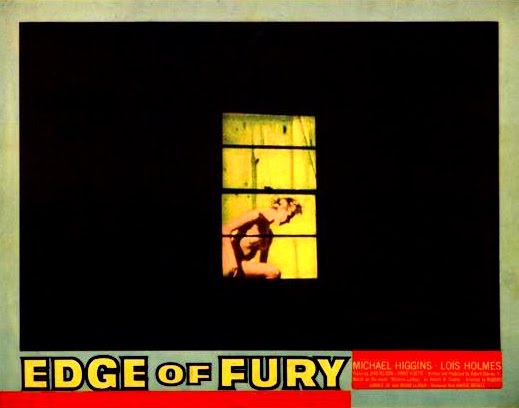 "If anything should happen tonight, don’t blame me."

Certainly you mean Edge of Doom, or Edge of the City, right?

Until yesterday I’d never even heard of Edge of Fury, and it turns out few others had either: it only has five votes in IMDb(!). It’s obscurity is fascinating, particularly because it scores big points as a film noir — and would certainly be much-discussed among noir buffs, if anyone had actually seen it. Get a load of that lobby card — how could you argue? The film is reminiscent of other, more well known pictures that delve into the realm of mental illness and sexual obsession: The Sniper, The Prowler, and The Night Runner are a few that spring easily to mind, though such themes are so entrenched in the noir style there are many other examples. Filmed in 1953, but shopped, shelved and finally sold to United Artists for release to double-bills in 1958, Edge of Fury is based on the 1948 novel Wisteria Cottage by Robert M. Coates. Coates himself was one of those rare authors better known for his “other job” as long time art critic at The New Yorker. In my capacity as an art professor, Coates is most familiar to me as the man credited with coining the term “Abstract Expressionism.” Therefore it isn’t surprising that the main character in Edge of Fury dreams of being a painter.

The protagonist is one Richard Hackett, a disturbed ex-serviceman who works in an antiquarian bookshop but draws and paints in his spare moments. The movie makes no secret that he was turned out onto the streets by the state mental institution for financial reasons — certainly as a veteran he would be eligible for treatment at a VA hospital. Additionally, the screenplay attributes his mental instability to the effects of combat — in a key scene late in the film he’s asked to describe his experiences and cannot muster the strength to do so. Like many noir pictures, Edge of Fury features voiceover narration, here offered by Richard’s psychiatrist, Dr. Abernathy. Abernathy’s presence is entirely ethereal; he never actually appears on-screen. Yet his narration is important: it serves to expedite the plot in a few key places, and gives the filmmakers a chance to editorialize about the sorry state of the mental health system.

Hackett is played by Michael Higgins, the only performer in the cast with a real career in the film industry. This was his first role, but he acted regularly for more than fifty years. Higgins’s baby-face will remind modern viewers of Frank Whaley, while, at least here, his screen persona resembles that of Tony Perkins. There are rookie moments in his performance, though it’s clear that Higgins had some talent (though not leading talent), and that the film’s weak moments might have been worked out with a budget that allowed for more takes. Yet it’s budget that really defines Edge of Fury — negatively in terms of casting and the footage of exposed film, but positively in the versatility of limited setting (including quality on-location exteriors), and the integration of the local terrain for story-telling purposes. Watch this and you’ll see what I mean. There’s never a moment when this resembles a prestige-level production, but it never feels very cheap either; and despite the anonymity of the performers it’s a competently performed film. Much of the credit for the impressive visual style goes to cameraman Conrad Hall, one of the film’s three credited cinematographers. Hall, who himself had quite a long career, would go on to win the cinematography Oscar three times — including twice in the final years of his life, for Road to Perdition and American Beauty. Hall died in 2003; Edge of Fury was his first full-length film. What a career. 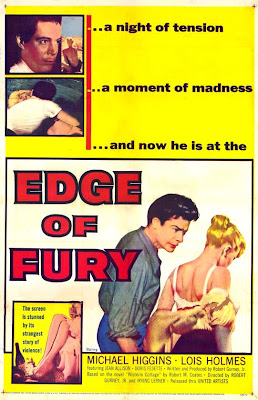 The plot is straightforward, but there’s ample set-up before the film actually begins: we come to learn that Hackett bumped into a motherly type at the grocery store and they began a friendship. Florence is a widow with two daughters, Louise and Eleanor. As the film opens we find Hackett securing a rental cottage out on Long Island where everyone can weekend together. Although the trusting Florence barely knows anything about the youth she treats him like the son she must have always wanted. The two develop a platonic, yet surprisingly intimate relationship, characterized by the affectionate and somewhat disconcerting use of pet names. The older of the two daughters, Louise, is a worldly model / actress type who suspects Richard of being a creep, yet gets off teasing him: she wears next-to-nothing whenever he’s around (screenies!) and goes out of her way to arouse him. He responds by peeping in her window at night, while working himself into a muttering fit of sexual frenzy. On the other hand Eleanor, barely out of her teens, is smitten with Richard. She spends most of the picture trying to consummate her girlish crush, but Richard sees her as a sister and instead focuses all of his attention on Louise — even after learning she has an alpha-male boyfriend. The dramatic thrust of the picture concerns the unraveling of Richard’s fragile psyche. He becomes growingly disturbed by Louise’s exaggerated sexuality, yet can’t overcome the mental wall that keeps him responding appropriately to a woman that he deeply desires — or even one that wants him. While Louise represents the unattainable adolescent fantasy, Eleanor is the ready and willing girl-next-door; and Richard doesn’t know what to do about either of them. Eleanor’s first attempt to kiss him results in clumsy acceptance and then violent refusal, while her second attempt brings forth a shockingly violent response. Richard’s aberrant behavior finally causes Florence to throw him out, which in turn only escalates the cycle of violence to a tragic level.

The movie details the foibles of Richard’s mental instability in great detail, but doesn’t offer much explanation of its cause. The “criminal mind” has become rather pedestrian pop culture stuff over the years, and audiences have grown used to films and television dramas reliably offering up childhood explanations for madness. Here we don’t get much: a vague allusion to the War — which Richard refuses to get into — and little else. We get no insight into his life story, his familial situation, or whether or not he endured any kind of trauma as a child. Of particular interest is Richard’s Freudian sexual obsession, the frustration of which is the defining element of the picture. He is clearly unable to have any sort of a caring relationship with a woman who is not a mother or sister figure, and when placed in any variation of a traditionally romantic situation he lashes out — sometimes violently. Later films would handle similar subject matter more deftly, but this one should nevertheless be praised for its attempt at a realistic depiction of real issues, particularly given its meager budget. 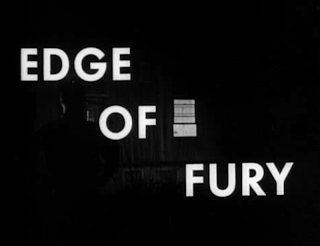 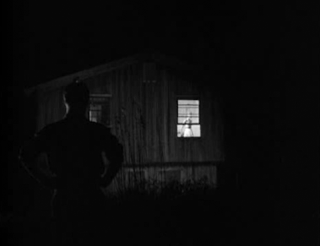 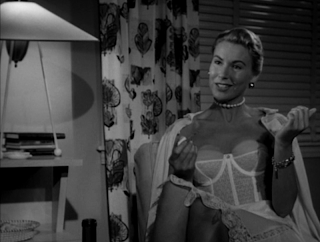 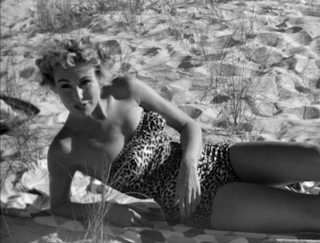 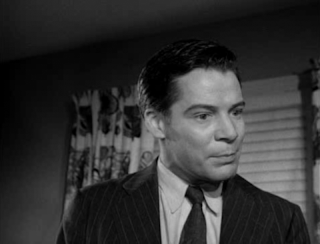 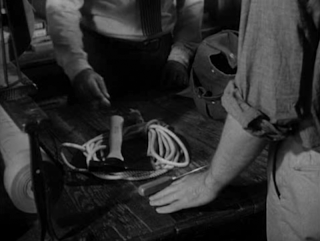