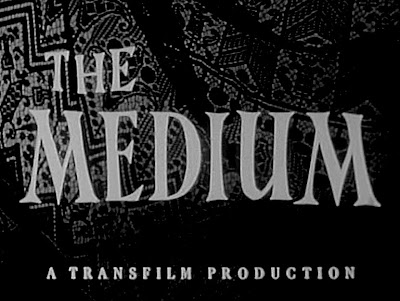 “If there is nothing to be afraid of, then why am I afraid of this nothingness?”

Here’s a truly astonishing film. The experience was all the more powerful because at the outset I knew nothing whatsoever about it — not even the premise. I was immediately drawn in by the striking imagery of the opening — image my surprise a few minutes in when everyone started singing.

A film noir opera? You got it.

Considering this site is dedicated to crime films, I probably have some explaining to do. The Medium, released in 1951, is an independently produced filmic opera with a decidedly noir-ish slant. Written, directed, and composed by Gian Carlo Menotti, it stars American actress-singer Marie Powers as Baba, a bunco artist who runs a low-rent fortune telling parlor as ‘Madame Flora.’ She’s assisted by her daughter Monica and adopted son Toby, a mute gypsy boy Baba condescends to as her “poor little half-wit.” The trio scratch out a meager living in one of the worst ways imaginable: by preying on parents who have lost a child. Their routine is incredibly polished, and despite the film’s expressionism and sung dialog, the early scenes are surprisingly documentary, sharing with audiences the behind-the-curtain methods employed to take advantage of the gullible.

Things go wrong when Madam Flora has an unexpectedly visceral experience during one of her séances: at the penultimate moment, she feels a man’s hands clutching at her throat. Following the departure of her guests, she blames Toby for what she believes a cruel joke. The youth gesticulates his innocence, but the unnerved Baba refuses to be placated. The narrative unfolds from this point along two tangents: We watch Baba come unglued — at first merely uncertain, then paranoid, and ultimately, insane, while the silent Toby struggles to maintain his innocence and survive in the household. Monica looks on helplessly, pitying her mother and secretly loving the boy.

The plot may be simple, but the movie is populated with one resplendent scene after another: In one expressionistic episode Baba crouches over Toby. Incensed that he won’t rouse from feigned sleep in order to look at her, she lights a candle and then drips the hot wax all over his chest and face. When his eyes burst open, she pours the wax on them, until they are sealed shut and a terrified Monica drags her from the room. Another finds Toby and Monica searching the town square for Baba. They stumble arm in arm through a crowded festival in the town square, at first forgetting about the missing woman — merely content to be young and away from their squalid flat. All is well until the two become separated. The smiles of the crowd become leers, and the gypsy Toby becomes persona non grata to the townspeople — without Monica, he cannot survive. This notion is maintained throughout the film, and is critical to The Medium’s tragic, if also predictable (it is opera, after all) denouement.

This is, at its heart, a typical film noir story: A low-life con artist scams one person too many, and fate finally intervenes to set things straight. Which brings me to a point of clarification: I’m not out to convince anyone that this is a film noir — what I’m doing instead is demonstrating the prevalence and versatility of the thematic elements and the visual language of noir, both of which The Medium employs authoritatively. This was filmed during the years in which the noir style was most often on the screen, and it’s quite apparent that Menotti wanted to couch his film in a style that was popular with and familiar to audiences — and perfectly suited to his subject matter. The extreme angles and shadows of film noir are everywhere, as are the obfuscated framing and handheld camera work we’ve come to identify with the style. In spite of an obviously meager budget, the art direction and set decoration are magnificent, taking full advantage of the dilapidated condition of post-war Rome.

This is a little movie at only 80 minutes or so; music people call it a one-act opera. Fewer than ten characters have lines, only five have more than one. The cast is excellent. Baba is played by contralto Marie Powers; this was her only feature film role. She sang the part on Broadway, and then a few years later during a live television performance. (Powers grew up a few towns over from me in Mt. Carmel, Pennsylvania, a hard-knock place — think the first act of The Deer Hunter — where people scrape anthracite coal from the ground, live for high school football championships, and cheap beer at the fire company. The place seems to have forgotten her.) She enjoyed an on-and-off theatrical career, with her brightest moment coming when she was cast third behind Olivier and Quinn in the original production of Becket. She died in New York City in 1973. Anna Maria Alberghetti appears as Monica, while the lithe Leopoldo Savona (who looks a lot like Prince) is Toby. Savona has an uncredited bit in La Dolce Vita, but made his biggest impact directing spaghetti westerns in the sixties. Alberghetti, a dead ringer for Pier Angeli, made the most of her debut here, going on to co star in numerous A-level Hollywood features and then shining on Broadway for the better part of two decades. She won a Tony award as Best Actress in 1962 for Carousel. The rest of the cast of The Medium complete the visual look of the film: the characters are unglamorous, vividly real, and occasionally frightening.

Considering that all the dialog is sung, the actors rely on rather Dreyer-esque pantomime in the intervening passages. Yet this never feels overly theatrical or the performers inauthentic. Of course the look and feel of film noir fails to resonate in every scene, and at times The Medium becomes reminiscent of a silent picture. The frame is vignetted — darkened in the corners — while continuous orchestration completes the feeling. It’s an odd, imperfect, intoxicating thing, this movie; yet despite a foreign setting it successfully communicates familiar elements of the best American film noir: it allows us to step down into and wallow in a world that isn’t all sunshine and roses. And while some have tried to paint this as a sort of specialized neo-realism rather than a film noir, it clearly owes more to the dark American crime film than it does The Bicycle Thief. The lighting and camerawork are too exaggerated, too unnatural for anyone to ever confuse this with neo-realism, and the doom that awaits Baba is entirely of her own design. In the end, The Medium reminds that there is always someone who has a tougher row to hoe, and that fate, like justice, is blind. 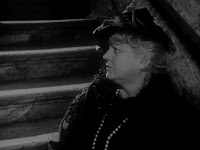 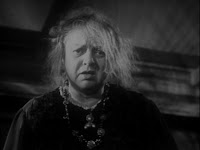 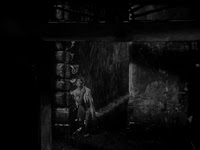 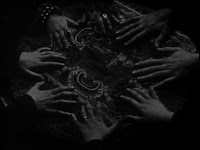 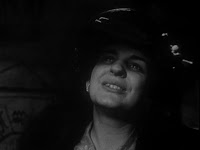 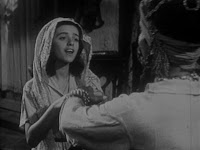 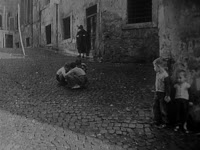 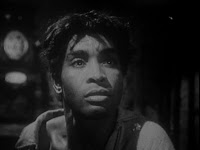 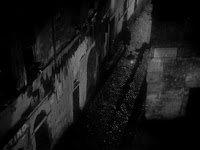 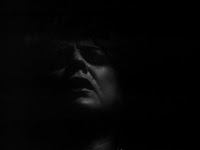 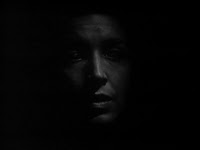 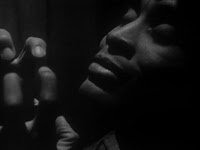