Welcome back — we cross over the half way point in the countdown this week, with a big bonus: I switched to the updated post editor (about time) and now I am able to make the posters much larger! So settle in and enjoy; feel free to download, and watch out for all the death rays in this week’s batch! 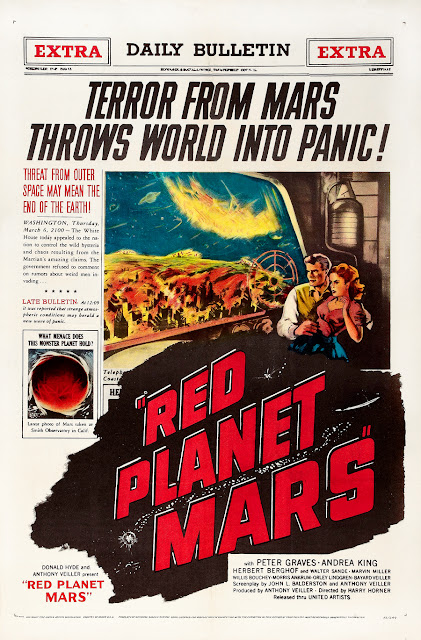 30. Red Planet Mars
It isn’t all that unusual to find mid-century film posters with a newspaper theme — it was certainly en vogue at the time for Hollywood studios to produce films with storylines that had been “ripped from the headlines.” However the poster for Red Planet Mars is probably the best of the bunch, primarily because it carries the look and feel of a newspaper design to an impressive extreme, not merely utilizing the tropes of the typical front page, but even creating a masthead and broadsheet with columns as well. I wish there were more sense to the black shape that contains the title type, or possibly that the title type could have become the actual newspaper headline, but this poster is good enough to resist quibbling over the details. 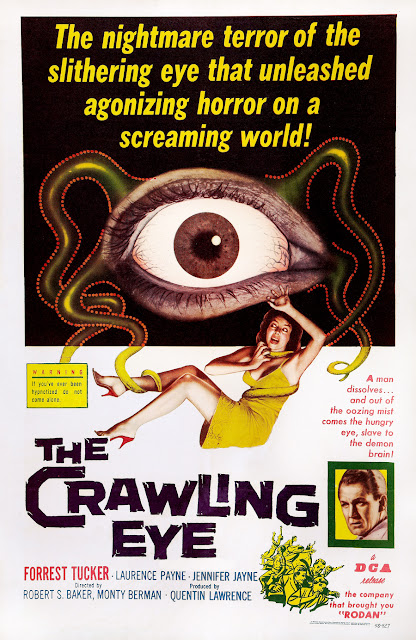 29. The Crawling Eye
My grandmother used to terrify us with stories of The Crawling Eye when we visited her house as children: “It came from behind the TV!” she’d say to my sisters and me in those dark moments before we went off to bed. We repeated the stories for years and years. Nostalgia aside, this poster is here because it presents one of the more original visions (ha!) of the most popular of science fiction poster tropes: the woman in the “arms” of the fantastic creature. I’m especially impressed with how easily my eye accepts the blending of photography and illustration here, and the designerly fashion in which the tentacles themselves change as they leave the black box that frames the titular creature. The woman looks truly afraid, and the title typography has been contrived to successfully integrate with the other elements in the poster — nice lettering as well. 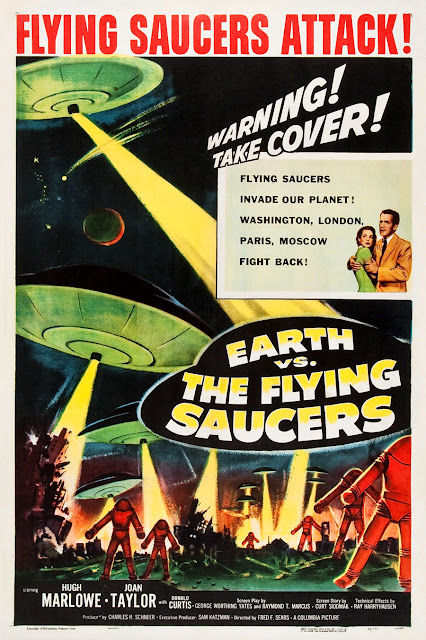 28. Earth vs. The Flying Saucers
There’s nothing about the way the spaceships and robots themselves are rendered that makes the poster for Earth vs. The Flying Saucers any better than many of the other posters in the countdown, but the illustration does create a sense of awe and wonder that is conspicuously absent from other designs. This just feels big, quite literally earth shattering. It appears that the invaders seem in endless supply, receding into space forever and ever, against a wasteland of shattered town and buildings. Given the global nature inherent in science fiction, one would imagine more posters would attempt to create such monumental vistas in their posters, yet few do, typically focusing on a single creature or incident. From the designers’ point of view, the application of the title in one of the saucer shapes is inventive and successful, but not very well balanced with the box containing the tagline above. I’d have shifted the tag to the other side of the poster to create a little more balance — even though it would have meant reconfiguring parts of the illustration as well. 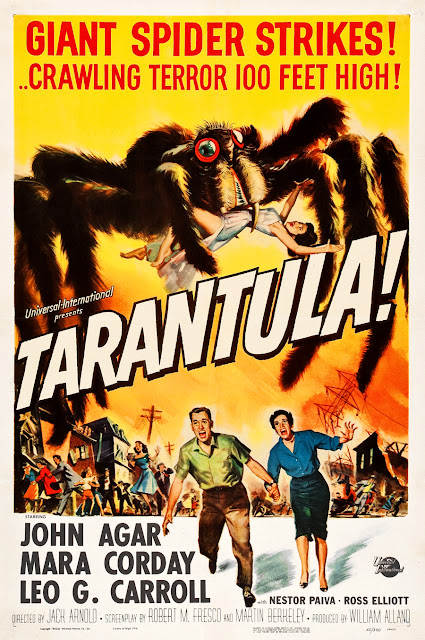 27. Tarantula
There’s so much to love here, I wish I could have placed this higher. Alas though, if we believe the tagline and this spider is actually 100 feet high, then our ubiquitous captive female is at least 50 feet tall herself! I also wasn’t aware that giant arachnids could also fly — that spider’s feet are nowhere near the ground! My only other gripe about this truly wonderful poster is that the man and woman in front look less like people running away than they do relatives at a family picnic who have just been goaded into doing an impromptu tap dance. She practically has jazz hands. In all seriousness though — is there a better instance anywhere out there of title type that really exemplifies fifties sci-fi poster design? 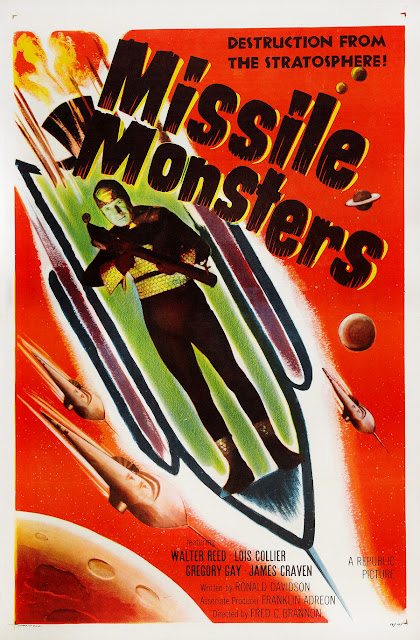 26. Missile Monsters
Like Satan’s Satellites, Missile Monsters is another feature film cobbled together from a previously released serial. In this case, Republic Pictures Flying Disc Man from Mars. Beyond the absurdity of the idea of the poster’s central image:  Martians attacking the earth concealed in gigantic missiles, the design here is quite good, even if traditional: A graphicly bold color palette, strong central image, and solid custom lettering — all arranged nicely. None of the elements seem intrusive or out of place, and the combination of drawn and photographed elements barely registers. That bright red sure pops! 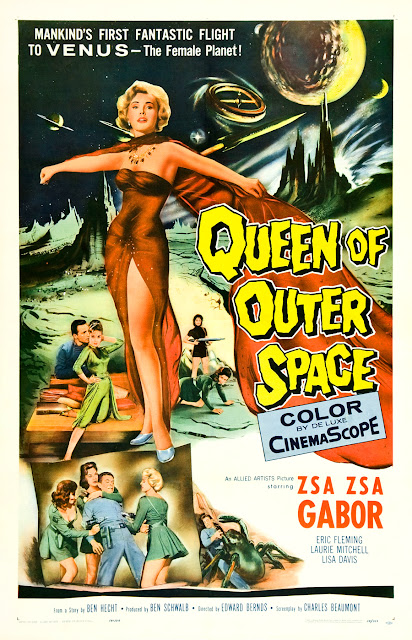 25. Queen of Outer Space
One of the campiest movies in the countdown sure has a sexy poster. It’s all about Zsa Zsa in Queen of Outer Space, famously based on a made-up-on-the-spot story be Ben Hecht, one of Tinsel Town’s premiere screenwriters. We have to award points when a poster gives a great inclination of what we’ll see if we plunk down money for a ticket, and this one does it as well as any other — even if the promised scenery is merely a cheesecake show. Nonetheless, dig that fantastic background illustration of Venus, and the iconic late-fifties type design. The guys over at House Industries got rich turning the typestyles from posters such as this  (and many of the others in this countdown) into commercial typeface designs. Who can blame them, the type (and the girls) are all beautiful! 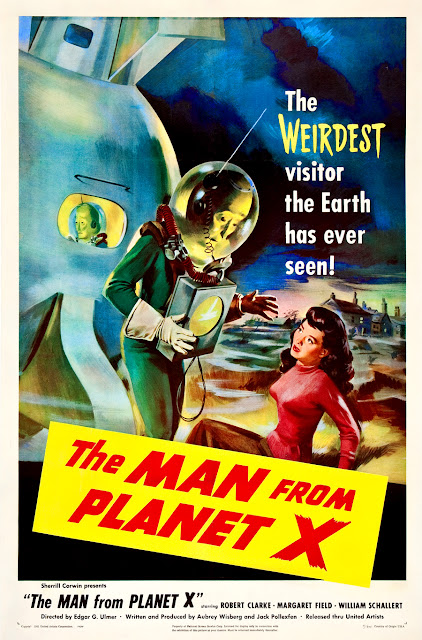 24. The Man from Planet X
The problem with Ulmer’s titular extra-terrestrial (one of the movies’ first), is that viewers could never get a sense of what he was actually looking at, and the big-headed, unreal sensation carries through to the poster. Yet it is refreshing to see a meeting between a visitor from space and beautiful girl that, for once, does not involve the girl passing out and being carried off in the visitor’s arms. The design here is very simple, and while I wish the title didn’t hide so much of the two figures, I’m happy to be able to see so much of the spooky, deserted moor in the background behind them. It’s vividly rendered in a wonderfully cool color palette, lending an air of mystery to Ulmer’s signature low-budget strangeness. 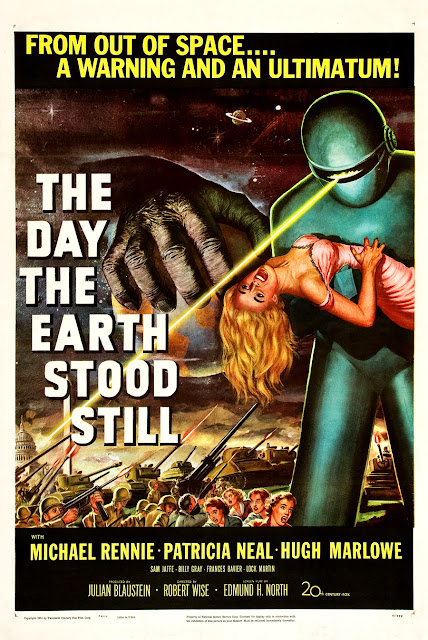 23. The Day the Earth Stood Still
I struggled to come to grips with this poster possibly more than any other in this genre. The “sum” of the design somehow manages to succeed — and succeed quite well, but when each of the individual parts are considered they come up rather short. Possibly it’s the detail in the illustration, or merely the inventiveness of the content, or maybe even the earthy (!) color scheme that makes this work, but I’m drawn to this poster like few others, in spite of its many faults. Here’s the laundry list of what bothers me: 1) The image of Gort firing a beam and clutching at the is quite well-rendered — why cut it off? It’s an awkward crop and it’s hard not to believe the poster would improve if the robot and his captive were moved to the center of the composition. 2) The hand reaching to encompass the planet is absolutely one of the most striking images on any of the posters in the countdown (partly accounting for the high ranking of this design), so why not move it up where we can really see and enjoy it? Notice the large horizontal band of unused and ineffective space above the hand and to the left of Gort’s head? Move the hand / globe element up into that space, which would make it more prominent and allow for better integration of the title typography, which … 3) is haphazardly handled and crammed into the design. All of the text feels very mechanical and dry, but given the unusual composition of this poster (especially that awkward negative space mentioned earlier) the title could certainly be better positioned, and would have been more provocative with a more organic, tense, or hand-drawn look rather than cold typography where all the letterforms in the title are given the same size and weight. This is the sort of title, using the word “THE” twice, that would give most designers fits — there’s no reason why that word should be as large as the title’s action words in either instance of its appearance. Nevertheless … 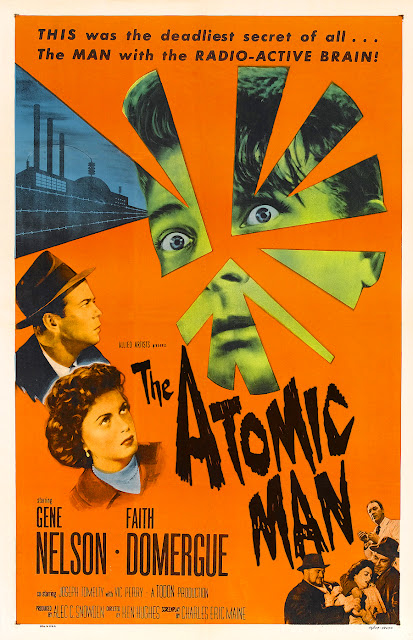 22. The Atomic Man
One of the most designerly posters in the countdown is also the one most rooted in modernism. It would be easy to believe the fractured visuals and collage-style arrangement of the poster of The Atomic Man came from the drafting table of Paul rand or even a youthful Saul Bass. The title typography in this example is somewhat ill-fitting in both style and placement, and gets lost against the more vivid visuals of the poster, but not enough to detract from what is one of the more original designs (and color schemes) in the countdown. 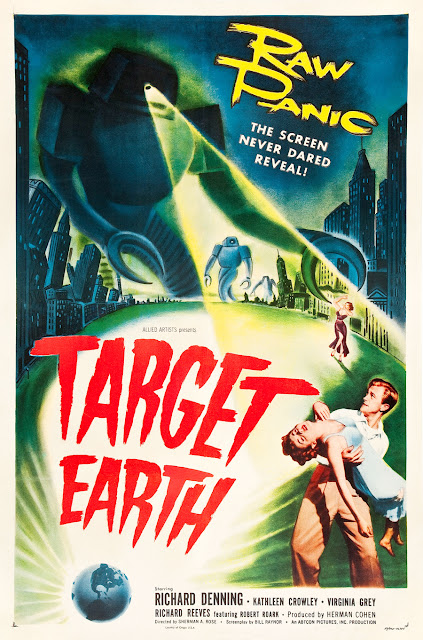 21. Target Earth
Betcha didn’t notice this: take a gander at the man and woman in the lower right corner. Compare the line of his body to the imaginary compositional line created by the tagline and the title typography, then compare the line of the female figure to the diagonal created by the robot’s raw and crab-like arms. See how the couple’s bodies reinforce the overall composition of the poster? Folks, that’s why composition and critical thinking are of a great deal more importance to designers than the ability to “draw,” and what makes this such a darn good poster. There’s even more to appreciate here: the rather soft style of the illustration, an overall clean and simple composition with strong diagonals, a vivid color scheme, and a great piece of custom lettering. A fantastic poster.


Back next Tuesday — ten closer to the finish!