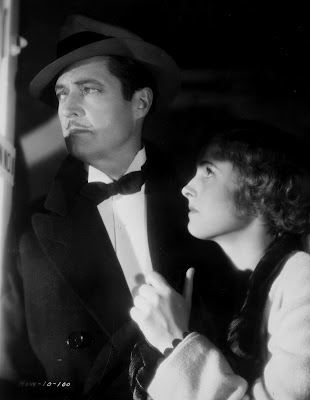 I’ll admit I’m cheating a little by essaying Transatlantic here, but the film’s final few moments, a gun-in-hand, cat-and-mouse chase over the catwalks and up and down the ladders of the steamy bowels of an ocean liner, is as vividly expressionistic as anything you’ve seen in the noir movies of the forties and fifties.

Practically no one has seen Transatlantic (31 votes on IMDb at the time of this writing), but it is not a forgotten film. Plenty of folks want to see it, but just haven’t had the opportunity. It hasn’t ever been released on tape or disc; it hasn’t aired on any of the classic movie channels, and it is conspicuously absent from those movie download sites on the Internet. I purchased my copy from afar, and consequently was not surprised to see the opening title cards displayed in French. Transatlantic is an American film from William Fox, and all of the spoken dialogue is of course in English, but my copy must have been duped some years ago from a French 35mm print. There are two newspaper cutaway shots, (where the audience is shown a newspaper page that helps develop the story), that are also in French, though fortunately my grasp was sufficient enough to get the point. 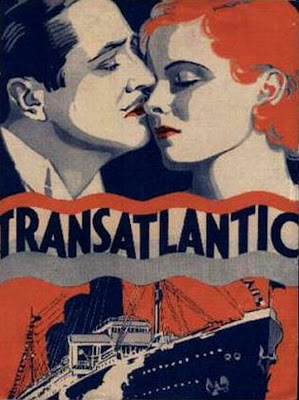 It’s a singularly a remarkable film, which is only partly why it’s so highly sought after. The primary reason is that it’s also an Oscar winner: Gordon Wiles took home the statuette for art direction, though if there had been a prize for film editing awarded at the 1931-1932 ceremony, this film and editor Jack Murray would have won it. (There were just a dozen competitive awards that year; the editing category was still two years away.) Easily as noteworthy as the art direction — and to contemporary sensibilities probably moreso — is the trendsetting deep-focus photography of James Wong Howe, by 1931 already a virtuoso of the movie camera. And while it might be somewhat unfair to deny kudos for Transatlantic’s astonishing visuals to director William K. Howard, it must be said that while Howard made a few good pictures, none of them are as striking as this one, obliging us to award the lion’s share of the credit to Howe, Wiles, and Murray.

There’s very little dialogue in opening sequence, though there’s a cacophony of noise. The titular ocean liner is preparing to leave New York for England, and we are treated to the dizzying chaos surrounding departure, all characterized by such dazzlingly showy filmmaking that one wonders if Busby Berkeley wasn’t somehow involved. Five and a half minutes of crane shots, dolly shots, tracking shots, and zooms; high angles, low angles, long shots and close-ups; the rich and the poor; the young and the old; drunken, sober, elated, and in tears; steerage and first-class; passengers and crew; taxis and barking dogs. It’s a delightfully frenetic opening, compressing the entire hubbub of departure into a few superbly edited moments. And while such a pace can’t be maintained for long, the opening sets the expectation for a fast paced and exciting film, one book-ended with an expressionistic sequence that nearly matches it for sheer visual enjoyment. 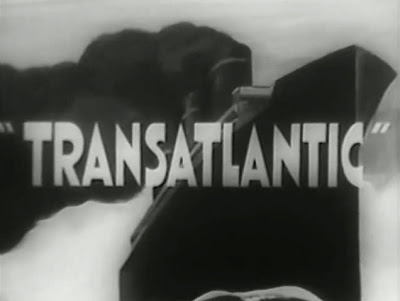 No one can claim that Transatlantic drags, though it necessarily has to slow down through its center. In the wake of the ship’s departure we get to know and travel with the passengers central to the story. I’m not interested in summarizing the plot, but the narrative concerns a group of unrelated travelers from assorted circumstances whose shipboard lives intertwine in unexpected ways. You could have figured that out on your own, right? Yet unlike many other films of the period, this is not a particularly plot-heavy film. And although it barely surpasses an hour, its cast of characters are all surprising well drawn and free of cliché. Characters meet and interact, but one doesn’t have the impression initially that the film is moving inexorably towards some resolution of story, that out ultimate goal is to find out “what happened.” Following this, it is possible to think of this as a sort of Grand Hotel at sea, though Transatlantic is more consciously visual, less star-driven, and churns on mystery rather than melodrama.

The star is Edmund Lowe, who plays the mysterious, yet refined and tuxedoed Monty Greer. We assume he’s a high stakes casino gambler or a gentleman thief, seemingly on the run. Also traveling are the Grahams (John Halliday and Myrna Loy). He’s a wealthy financier and philanderer; she’s the devoted, even if not so naïve wife. What she doesn’t know, however, is that her husband’s bank just went belly-up, and he’s absconding with the funds. The news of their misfortune catches up to them mid-voyage via the ship’s newspaper, sending into hysterics many of the ship’s other passengers, particularly the pedantic Mr. Kramer (Jean Hersholt), who heads for Graham’s cabin and a date with destiny…

There’s more to learn about the characters, but I won’t get into that. The movie builds up to the gem of a climax I mentioned earlier, where Lowe uses a handgun to tie up all of the story’s loose ends. It would be a crime to give the thing away, but this scene in particular is what I feel lets me get away with writing Transatlantic up on a page devoted to noir and crime films. Anyone who sees the sequence can’t deny that it must have been highly influential to the generation of filmmakers who would immerse themselves in the noir style. Taking place entirely within the mechanical confines of the ship’s darkest and most inaccessible spaces, Lowe chases his quarry through a warren of pipes and pistons, up ladders and across narrow grates, around corners over ledges. And through the steam — what steam! — billowing from countless valves seen and unseen, lit magnificently by countless well-hidden sources. It’s tense, expressionistic, and highly stylized. The actors must have sweated off ten pounds in the filming, and had a glorious time doing it. If it was ever true of a film, the denouement is worth the price of admission.

All too often we think we have the lineage of film noir completely pinned down and accounted for. Literary sources, cinematic sources, and even the studios and filmmakers themselves — all lined up and accounted for like the neat rows of faces in a mug book. Then a movie like Transatlantic — an ultra-chic art deco character mystery — bubbles up from the forgotten past, and reminds us that film can be a frustratingly and wonderfully nebulous art form, and that we aren’t quite as certain as we think we are.