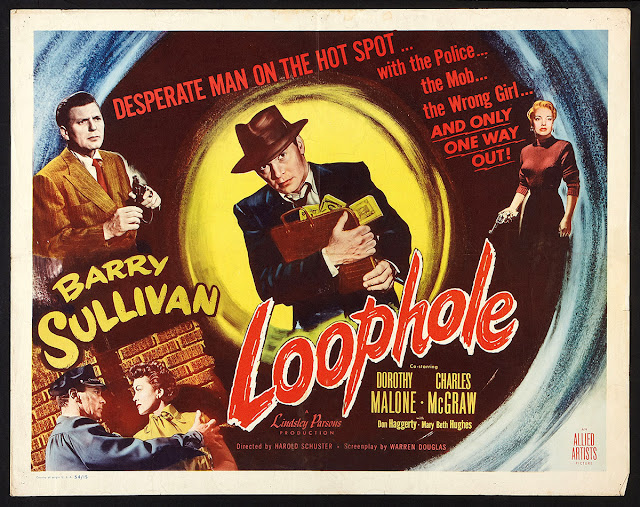 Take it easy. If you’re innocent you’ve got no worries.

Yeah? Well, I am innocent. I got plenty of worries.

Allied Artists’ Loophole is one of the numerous exercises in “it could happen to you” storytelling that surfaced in the noir films of the McCarthy era. With obvious parallels to the red baiting of the day, it served to remind 1954 audiences that not all was well in the world, and that innocence didn’t immunize any citizen from persecution. Even in its final moments, after order has presumably been restored to the world, it irresistibly subverts the “happily ever after” endings of mainstream Hollywood films. Yet Loophole’s noir ethos doesn’t begin and end merely with the theme of fate dealing its hero a rotten hand — in this case a bank teller wrongly suspected of grand theft. As a film that brokers in the attainability of the American Dream, much of its conceptual darkness comes not from the unfair circumstances thrust upon the hero, but instead from its depiction of the man responsible for the hero’s misfortune. He is neither a bank robber nor a police officer, but a sociopathic insurance investigator long since bereft of his judgment. One can argue that this man, played vividly by the iconic Charles McGraw, is the real noir protagonist in Loophole.

On the surface it’s a pleasant-enough B movie, with a good cast, fair production values, and strong story concept. Barry Sullivan is Mike Donovan, teller at the Hollywood branch of the Capital National Bank. Mike’s a regular guy if ever there was one: he fought the war, married the girl next door, and then settled down in one of those post-war bungalows in the city where the sun always shines. As Loophole opens, Mike is happily ensconced in the American Dream. One Friday, a team of federal auditors gives the bank its annual checkup. However, a thief named Herman Tate (Don Beddoe, looking as dowdy as a character named Herman ought to) is posing as one of the examiners; with the help of his sexy girlfriend Vera (Mary Beth Hughes), he manages to swipe almost fifty grand while Mike’s back is turned. When his end-of-the-day numbers refuse to add up, the terrified teller leaves for the weekend without informing his supervisor. He comes clean Monday morning, but it’s too late — he already looks guilty. If the missing cash isn’t found, the insurance company will have to make good. They dispatch ex-cop Gus Slavin (McGraw) to investigate, and he’s dead certain Mike is at the center of an inside job. The FBI and LAPD are brought in, and although they eventually come to believe his story, Slavin remains unmoved, convinced that if he can keep Mike unemployed he will eventually have to use the stolen money to pay his bills. Since he really is innocent, Mike is forced to sell his house and take a menial job as a cab driver. As the insurance company’s payoff deadline approaches, Slavin increases the pressure, until Mike realizes that in order to get out from under, he has to nail the crooks on his own. 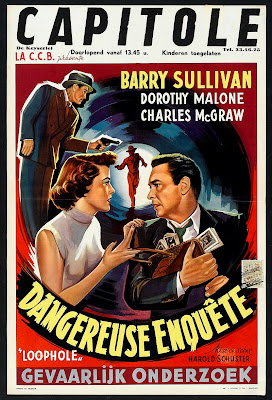 We often forget that the characters of classic film noir survived not only the Second World War, but the Great Depression as well. Although the postwar years were characterized by growing prosperity and wealth, those enjoying it were intimately familiar with dire circumstances. If nothing else, Loophole shows us how two men with diametrically opposed outlooks cope with life in these supposedly better times. Films such as this one quietly whispered to audiences that the American Dream isn’t guaranteed — that our happiness can be taken away in the blink of an eye. Mike Donovan isn’t the Swede or Jeff Bailey— he doesn’t have it coming. Yet unlike those characters he staves off morbidity and cynicism, maintaining his sense of optimism throughout the film. Mike is part of the system: married to a faithful wife, working steady, and making payments; he’s not on the run from some inescapable past. And when the going gets tough Mike and his wife Ruth (Oscar winner Dorothy Malone) stick together — and eventually triumph. Years later they will most likely remember their ordeal as a bump in the road, something to chuckle about over roast beef with Ed Sullivan. Looking at Loophole from this perspective, it hardly rates as a film noir. It even seems opposed to some of the notions that we consider definitive. Yet it is a noir, achieving that status through the more subtle characterization of Gus Slavin, who, unlike Mike, has not been able to successfully conform to the fifties status quo.

All we know about Slavin’s past is that he “resigned” from the LAPD, but we never learn why (though early on when he coldly remarks that “What [Mike] needs is a taste of rubber hose,” we get an idea). Although Slavin resembles the noir protagonist (neurotic, obsessive, anti-social, alienated) more closely than Mike does, he isn’t the hero of the film. He pursues his suspect as implacably as any single-minded protagonist from T-Men or Appointment with Danger, but unlike them he fails to “get his man” in the end. Why not? The answer lies in Slavin’s great flaw: his inability to differentiate between the guilty and the innocent, brought about by his failure to conform to societal mores. We know that Mike is innocent — after all we witnessed Herman’s crime — and yet, while the FBI and LAPD officers working the case can plainly see his innocence, Slavin can’t. It’s this pathological presumption of guilt that undoubtedly cost him his police job, and Slavin is incapable of learning from his past mistakes. He is a stubborn man who has fallen from the razor’s edge, and has lost that part of his self that allowed him to function in a rational world. The film’s most fascinating moment is it’s final one, when an exonerated Mike, restored to his job at the bank, looks up from his orderly column of figures to see Slavin inexplicably lurking outside his window — as the narrator confides that once again “Mike Donovan’s sitting on top of the world …… or is he?” It’s in this moment, when we recognize that there will always be Gus Slavins in the world, that we begin to wonder if it’s possible to ever truly be safe.

One last note: The image on the film’s poster is a sham. At no point in the film does Barry Sullivan ever hold a satchel full of money.