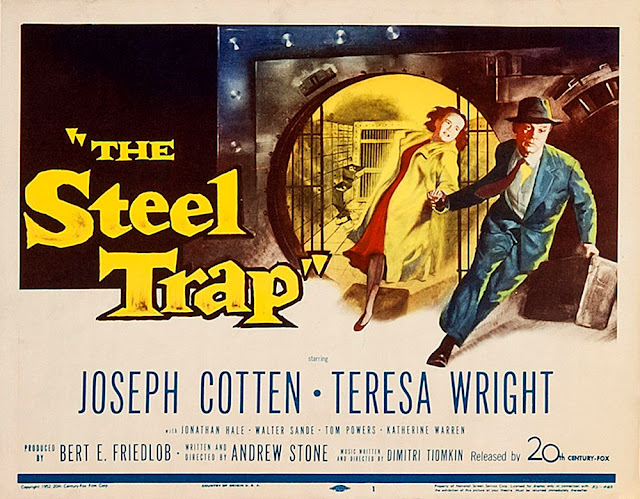 In the 1952 film The Steel Trap, a dissatisfied and bored Jim Osborne (Joseph Cotten) passes the hours dreaming up ways to embezzle from the bank where he has, for the past eleven years, toiled himself into a life of restless humdrum. Soon daydreams morph into actual preparation, and Jim waits for the right weekend to put his plan into action. If he can clean out the vault one Friday after everyone else has gone home, he’ll have until Monday morning before the cash is missed. A million bucks jammed into a suitcase later and it’s planes, trains, and automobiles in a mad dash for Brazil — with his unknowing wife Laurie (Teresa Wright, lovely as a blonde) in tow. But just like a cat with a ball of yarn though, fate steps in and toys with the escape plan — Mr. and Mrs. Osborne can’t seem to get out of the country. When at last it looks as if they can get clear, Laurie gets wise to the theft and heads straight back to sunny California. Facing the prospect of cooking, cleaning, and sleeping all by himself, Jim also reverses course in a desperate attempt to replace the loot before the bank reopens Monday morning…

The themes at play in The Steel Trap aren’t unusual; the movie stands on the shoulders of films such as Double Indemnity (1944), Pitfall (1948), and Roadblock (1951), where other bored men use desperate, reckless means to escape the monotony of their middle-class existence. Don Siegel’s Private Hell 36 (1954) and Mark Stevens’s feverish Time Table (1956) would continue the trend through the middle fifties. Judging by the popularity and preponderance of these tropes throughout the entire arc of the classic film noir period, we come to understand how these crime films were able to effectively offer counter the trumped-up veneer of optimism smeared over the postwar culture — including most of Hollywood’s film output.

Sans film noir movies, where could we explore in an effort to come to terms with an inescapable truth of those years: Not one that suggested that for most Americans the prosperity and material gain wasn’t possible, but that it simply wasn’t enough. Jim Osborne has all the ingredients those glossy magazine ads led him to believe were the recipe for happiness, as he says to a coworker:

“I was just thinking I’ve got a wonderful wife, a wonderful daughter, good health, a steady job, a reasonably secure future. I should be a pretty contented man.”

And yet he isn’t. In spite of all those things (not to mention a cute little bungalow and shiny new car) Jim’s life is vacant and without purpose, and he is unable to come to terms with his malaise. In reflecting upon his unhappiness he doesn’t seek renewal through increased commitment to his family, or to his community, or by considering a different, possibly more fulfilling career — like an addict, he just wants more. A gossamer, tenuous more. Somewhere else, somewhere exotic.

Writer-director Andrew Stone, who made a long career of musicals but switched to noir melodramas in the fifties, essentially treats The Steel Trap as a suspenser. It moves quickly and doesn’t waste many frames putting the money into Jim’s suitcase. Most of the running time is used up watching the Osbornes scramble to overcome a Kafka-esque series of roadblocks, while Jim grows ever more paranoid and tense. For the most part it works, but Jim’s interactions with a bevy of airline clerks (as well as an absurd scene with a U.S. customs agent) grows tedious, and finally brings to mind a much-loved Steve Martin and John Candy satire from an utterly different genre. Dimitri Tiomkin’s music is as good as expected but Oscar winner Ernest Laszlo’s cinematography is not. The Steel Trap only occasionally looks as good as Laszlo’s other film noirs, and a few of his set ups can only be described as, well, lazy. In the end this is a well-made and watchable film that nevertheless resonates more as a reflection of its time and issues than it does as pure entertainment or on the merits of its production.

Beyond the overarching themes, two additional moments in particular stood out to me: one keys off Jim’s opening narration, which informs the audience that his tenure at the bank has lasted for eleven years. Fifty-two minus eleven equals Pearl Harbor: Jim, embezzling bank manager, missed the big one. It seems that many of us have forgotten that 1952 was a time of war in the United States, but certainly it was front and center in the minds of ticket-buyers at the time, and the filmmakers inserted the detail as to not alienate all of those who would have naturally assumed that Jim had served. It’s also fair to suggest, as a friend just reminded me, that by being cast as a criminal Jim serves not only as a stand-in for all of those “home front connivers” that made life more difficult for everyone during both wars, but also as a representative of the pervasive corruption depicted in such films as The Captive City.

If 1952 was a time of war, it was also the era of burgeoning television and of rampant McCarthyism. (In just two short years, the reckless senator himself would fall prey to the devilish little device.) A later moment is emblematic of Hollywood’s take on both: Laurie, rehashing her day, tells Osborne about service calls from three repairmen. The first wanted $18 to fix their floor model, the second $32. The third restored the set to perfect working order by tightening a loose wire and didn’t charge a dime. It’s a shrewdly timed jab at the costliness and potential risk of television ownership, coming just as the device was beginning to proliferate in the rural and suburban areas of the country. The conversation between husband and wife hints at an issue more deeply troubling than the honesty of TV repairmen however. At the point when Laurie says, “integrity seems to be a thing of the past, I’d even suspect my own brother,” we have no choice but to cast our eyes at the person seated next to us in the theater. She is the innocent in The Steel Trap, the moral center of the film. And if she has fallen victim to suspicion and paranoia of a nation under the spell of Joe McCarthy, what hope can there be for the rest of us?

In real life, dissatisfied men of a certain age blow their savings on sports cars or hair implants; maybe they even fool around. In the world of film noir they commit crimes. The vast majority of them, whether real or celluloid, eventually come to their senses. It takes abandonment for Jim Osborne to come to his. He wanders the streets of New Orleans deep into the twilight, deciding whether to board the plane headed back to L.A. or the one for Rio, contemplating the life that accompanies each ticket:

As he approaches a flower seller, the film slips into an eerie montage showing the Osbornes as every bit the family from the magazine ads. Strangely though, the series of images plays against the outline of an orchid, and are saddened by an ethereal Ella Fitzgerald tune. The effect of the montage is to suggest that these memories can’t be easily recaptured, if at all. Nevertheless Jim tosses his cigarette into the gutter and makes for the airport. Yet in choosing to return to his old life (provided he can undo his crime) I wonder if he has come to understand what exactly made it feel so hollow in the first place, or if he has discovered some better way to move forward — because his potential new life looks exactly like his old one and his change in outlook seems somewhat less than earth shattering. In this The Steel Trap leaves us to ponder some troubling questions. Hopefully Jim knows the answers.