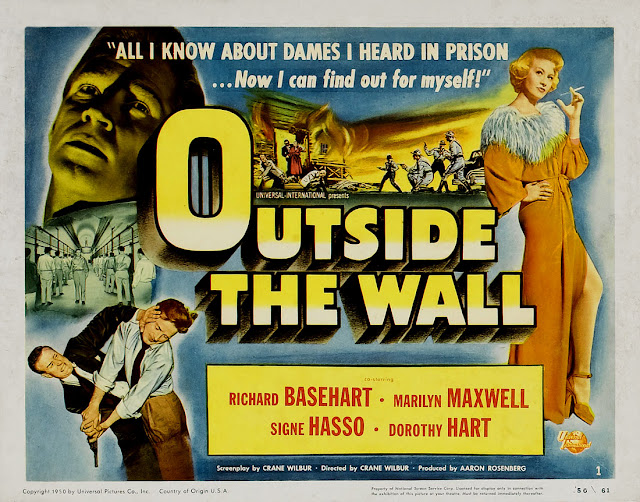 Larry Nelson gets thirty years in a big boy cell after he accidentally snuffs a reform school guard. But fifteen years later, he’s a rehab poster boy: educated, good-looking, trained in the prison infirmary, the pride of inmates and staff alike. Best of all, his parole just came through. It ain’t all rosy though: Nelson is institutionalized and nervous to leave “home,” never having lived on his own. He’s also never driven a car, had a bank account, or taken a drink. He’s practically a doctor, but knows nothing of the birds and the bees. With the promise of a job at the city hospital and $600 in the breast pocket of his prison-issue suit, he hits the busy streets of Philadelphia, braced for a new life somewhere Outside the Wall.
And he ends up washing dishes at a greasy spoon. The hospital’s applications and background checks — not to mention candy stripers — scare the hell out of him. At first pots and pans suit Nelson just fine, but when a pair of stick-up men crash the diner he decides that big city life is just too much to handle. He hoofs it out of town and into rural Jewel Lake, where he answers a help wanted ad at the local TB sanitarium. The lab job pays little more than room and board, but the boss doesn’t ask too many questions. Nelson settles in with ease, and soon earns the respect of his superiors and the attention of two pretty nurses. Elegant brunette Ann (Dorothy Hart), is the girl next-door type, while Charlotte (Marilyn Maxwell) is an ambitious blonde who likes men with “nice cars and money to spend.” Hard-to-get Charlotte is everything Nelson ever dreamed of in a skirt, but he needs a ragtop and wad of cash before she’ll give him the time of day.
Back in Philly, ex-cons take an armored car for a cool million. Their tuberculosis-stricken leader, Jack Bernard (John Hoyt), needed a big score to bankroll his remaining years. Back in Jewel Lake Nelson couldn’t care less about the headlines — until Bernard checks into the sanitarium. The convalescing crook needs a courier to run weekly payoffs to his scheming ex-wife Celia (Signe Hasso), who he fears might flip on him for the reward. Nelson agrees — tired of getting the cold shoulder from Charlotte. Celia wants the entire million though, and hires thugs Red (Lloyd Gough) and Garth (Henry Morgan) to help her get it. Bernard is the only one who knows where the money is, but Celia and her boys wrongly assume that Nelson was in on the heist and try to torture the information out of him. He escapes and hurries back to the sanitarium, where he finally sees Charlotte’s true colors and turns his attention to Ann, confessing his knowledge of the heist as well as his past. She’s elated, but insists that before they can be together he has to come clean with the cops. Meanwhile, Celia and her goons are barreling to the sanitarium for a final reckoning with destiny…
This is a solid crime picture, even if it isn’t a full-bodied film noir. Larry Nelson comes to grips with freedom altogether too quickly and too well. He isn’t plagued by the crushing insecurity, self-loathing, or self-doubt that makes Steve Cochran’s character in Tomorrow is Another Day (1951) infinitely more interesting. (That special movie also manages to capture the bad blonde and the angelic brunette in the same character!)  Nor is Nelson the product of the typical noir prison, as in Brute Force, but rather the very real Eastern State Penitentiary — Cherry Hill — where the golden rule was rehabilitation. Instead of cruel treatment and an uncaring bureaucracy, he is carefully educated and highly trained. The system dotes on him. And the everyday folks he bumps into aren’t suspicious or frightened noir regulars. Instead of being shunned, exploited, or ripped off, the people of Outside the Wall try to lend a helping hand: the warden lines up a job, a uniformed cop helps him navigate traffic, and instead of looking for a kickback, his boss at the diner is ecstatic to have found such a hard worker. Sure, a barfly tries to lift his wallet, but he swats her away with ease. 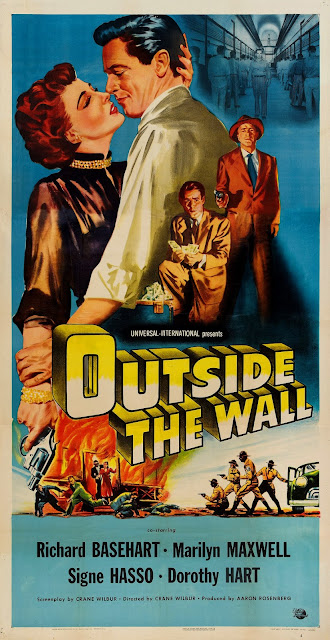 Speaking of Nelson, his feathers never get ruffled, even though he’s got zero life experience. He isn’t paranoid or desperate — he’s not even mildly neurotic — and like a jailhouse Sam Spade he uses his prison smarts to stay a step ahead everyone else. But even if we don’t have both feet fully in noir territory here, Outside the Wall is plenty worthwhile. Marilyn Maxwell has a lot of fun making like a bad girl, and Harry Morgan is a grotesque (if underutilized) villain even by his lofty standards — like a pint-sized inquisitor gets people to spill by jamming scalpels underneath their nails. Noir or not, this is unabashedly a crime film, and occasionally a brutal one.
I’m ambivalent about the bland Richard Basehart, even though his early movie career is steeped in noir, and Outside the Wall was one of his better roles. I’ve read much about what a great actor he was, and how he could have been big star if only Hollywood had given him the chance. Rubbish. Basehart was good-looking in a vanilla sort of way and he had some depth, but he lacked above-the-title, big star screen charisma — and said so himself. Rather than compare him to Burt Lancaster, the bland Basehart was rather a stone’s throw away from Kent Smith, which, in the end, isn’t a terrible thing. Both enjoyed lengthy careers and appeared in more memorable films than most actors could have dreamed of. Maybe Basehart simmered a bit more than Smith, but he was certainly no Lancaster.
One of the best things about Outside the Wall is writer-director Crane Wilbur’s dialog: “You’re being born all over again kid, except this time you’re a man.” “Where you been all your life?” “I just found out what money can buy.” “I always was a sucker for a dame.” Smart, pulpy stuff that sometimes hints at epigram and always makes me smile. Wilbur had a thing for prison pictures. He penned a bunch of noir screenplays, most dealing with jailbirds and ex-cons. A Hollywood lifer with who began as an actor, he wrote for the ear and punctuated his scenes with good lines, no matter what he was working on — it’s hard to imagine that screenplays as contradictory as The Miracle of Our Lady of Fatima and House of Wax both sprang from his typewriter in the same year (1953). But if Wilbur was a fine writer he was a pedestrian director. Canon City (1948) and Outside the Wall are plenty good enough, but they pale next to He Walked by Night and CrimeWave (1954), Wilbur scripts brought to the screen by more gifted directors.
Outside the Wall is cheap, enjoyable, unspectacular, and entertaining. It has too much brotherly love for a bona fide film noir, but it offers a rare glimpse at the mid-century streets of one of America’s great cities, and it serves up plenty of what crime and noir fans get jazzed on: prisons and parolees, bad girls, torturous thugs, and killers who pull heists with hand grenades. Everything about it may have been done better in some other picture, but what’s not to like?