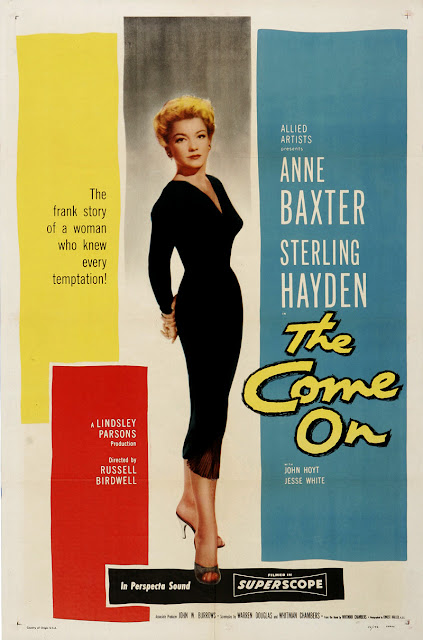 “A woman like you needs a good beating at least once a week.”

Park Avenue, the best schools, a rich family — Anne Baxter came up easy. Her grandfather was Frank Lloyd Wright, for pete’s sake. He built her a theater at age three, and by ten she knew she’d be an actress. She was on Broadway at thirteen, studying with Maria Ouspenskaya. Baxter soon looked west, and breezed into the movie business with the same sense of ease that she had always known. She lost the role of Maxim’s young wife in Rebecca to Joan Fontaine (Hitch thought her too young), but Daryl Zanuck was nevertheless tickled to sign her at Fox, where she enjoyed featured player status until breaking through in Welles’s 1942 The Magnificent Ambersons. She really scored in 1946, winning an Oscar supporting Tyrone Power and Gene Tierney in The Razor’s Edge. That same year she got hitched to block-of-wood noir-guy John Hodiak, and began trying in vain to balance marriage and work. When she landed the to-die-for role of Eve Harrington in the 1950 juggernaut All About Eve, she was as close to the top of the Hollywood heap as she’d ever get. But rather than building her star power with another plum part, she decided to get pregnant.

Baxter took some time off to give birth, and made only one picture in 1951, playing the Hawk’s wife in Follow the Sun — hardly the appropriate follow-up to a mega-hit with fourteen Academy Award nominations. Upon her return it seemed that audiences had moved on, infatuated with Lana, Liz, and Deborah. Baxter couldn’t vamp it up with the younger, more sexualized honeys like Carroll or Marilyn either, dolls who could mug for the camera in a way that the refined, brainy actress just didn’t seem to have in her. But she was tenacious about working, and by the time she starred in Fritz Lang’s 1953 film The Blue Gardenia, she and Hodiak were quits. Anne kept her Oscar and daughter Katrina; Hodiak moved in with his parents, went back to work himself, then kicked the bucket — dead of a heart attack at 41.

Baxter soldiered on, a divorced mother on the bad side of thirty. She kept plugging, but was obligated to make-do in the occasional B picture between better parts. (Just like Edward G. Robinson (who had his own troubles) Baxter eventually got a DeMille–sized boost via 1956’s The Ten Commandments.) Which brings us to The Come On, a movie with a good cast but standard (meaning completely sub-standard) Allied Artists production values. Yet unlike so much of Poverty Row’s typical fodder, The Come On had an ace up its sleeve: a great cast put together by producer Lindsley Parsons, who knew how to do a lot with a little, and proved it in a string of cheap but good noir pictures, including Cry Vengeance (1954), Loophole (1954), Finger Man (1955), and Portland Exposé (1957). The Come On sports two bona fide movie stars: femme fatale Baxter and fan favorite Sterling Hayden. The movie ties them up romantically, but suffers a little for their lack of chemistry — yet that’s the thing about quality professional actors: even without romantic fireworks they can still make almost any film interesting. It’s too bad Hayden doesn’t get one of the movie’s cop parts — he just never seems quite as interested when he doesn’t have a badge on. That being said, I’d still queue up just to see the guy standing around smoking. 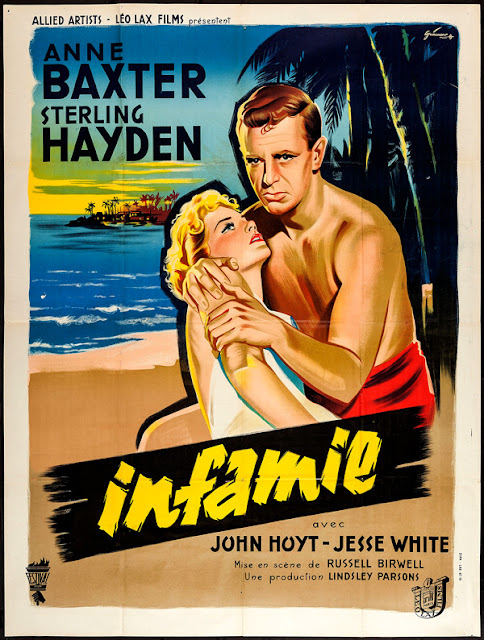 I won’t waste time trying to relate much of what happens in The Come On, because this is the sort of plot-driven movie where 'what happens' is all that matters anyway. Besides, the story is absurdly complex — serpentine, silly, and stuffed with the sort of happenstance and circumstance that’s only palatable in Poverty Row pictures. However I’ll give The Come On, and its veritable team of writers, this much credit: it has a million twists, even one or two you might not see coming. Here’s the setup in a nutshell though: Rita Kendrick (Baxter) is sunbathing on a deserted beach somewhere south of the border when she catches fisherman Dave Arnold (Hayden) giving her the once over. She tries to play it cool, but is thwarted by the wind and a beach towel that just won’t lie down. Cue the big fella, who helps with the towel then steals a kiss. Sparks fly, and before long the two are sharing a smoke and making plans for a late-night rendezvous on Dave’s trawler, Lucky Lady. Coy and mysterious, wearing a painted-on white dress straight from Lana Turner’s closet, Rita shows up, but turns skittish and flees Dave’s boat as soon as he tries to get physical. Later he sees her at the bar and gets wise — she’s sitting with two men, one of whom is her husband Harley (John Hoyt), much older and all kinds of drunk and disorderly. Dave saunters over to introduce himself, assuming Harley is Rita's father, which peeves the old guy and somehow earns Rita a whiskey-spiked smack across the face. Dave then lays him out, leaving the third man to clean up the mess. Later that night, Rita returns to Lucky Lady with a confession on her lips. Harley isn’t really her husband — nor is that even his real name — he’s her partner in a blackmail grift they’ve been working for the past three years, using her “come on” to bilk rich geeks out of their dough. The schmuck at the table was their latest patsy. But now that she’s met Dave, she knows what real love feels like and wants to break free from the scheme. She wants a picket fence life back in the states — and maybe she and Dave could have it if only Harley didn’t have his hooks dug in so deep, if only she could get at her share of the grift money, if only there were some way to get her “husband” out of the picture…

The Come On is obviously a B movie, warts and all, but the performers and the filmmakers put forth an undeniably sincere effort. Its shoddy production values and pedestrian photography are made up for by its story — complicated but coherent — and even more by its cast. Career TV man John Hoyt practically steals the show as Baxter’s lowlife partner; while Jesse White — known to generations of Americans as the Maytag repairman — is a spectacularly oily private eye. Admittedly, no one could possibly argue that Hayden is at his best, but Baxter gives it everything she’s got. Sometimes a performer’s personal circumstances equip them to play a role so well that an otherwise inconsequential film becomes special — a raging Edward G. Robinson in Black Tuesday comes to mind — in her own way Anne Baxter is that good in The Come On. (The great BmacV even calls her a “trouper.”) In spite of her upbringing, it’s plain to see how Baxter’s later misfortunes had changed her. Gone now is what Zanuck called the “bitch virtuosity” that had made the pampered star into the perfect Eve. The woman on display in The Come On is wary, vulnerable, desperate, tired, and to tell the truth, trying just a little too hard. In other words, she’s perfect. In the years since All About Eve, Anne Baxter had seen her marriage fail and her ex-husband die. She struggled mightily to maintain her status in Hollywood, all while trying to raise a daughter that too often she left in the care of others, and wading through an endless but excruciatingly shallow pool of male suitors, praying that one might make a suitable father. She was lonely, wracked by guilt, caught up in a life that bore little resemblance to the one she had enjoyed in the forties. She was perfectly equipped to play Rita — a beautiful woman standing at a crossroads, neck-deep in trouble and unable to move, needing someone to help her make the right choice and get her life once again moving forward.

The Come On (1956)
Directed by Russell Birdwell
Produced by Lindsley Parsons and John Burrows
Written by Whitman Chambers, based on his own novel
Cinematography by Ernest Haller
Starring Anne Baxter, Sterling Hayden, and John Hoyt
Released by Allied Artists
Running time: 83 minutes.