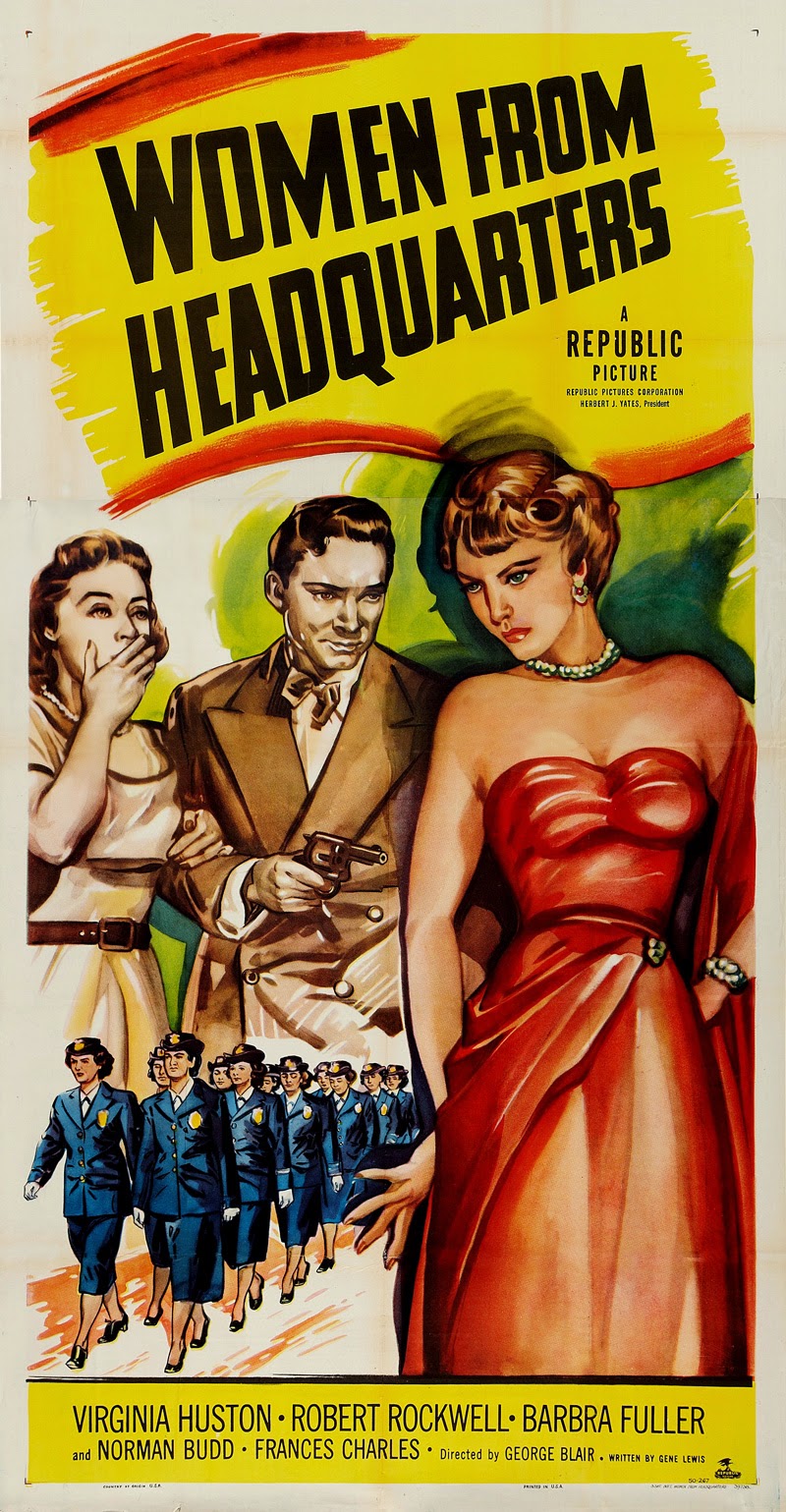 “Around the clock you will rescue children from unfit homes, neglectful parents, and crime provoking surroundings. On patrol of public parks, playgrounds, and schoolyards, you will keep a vigilant watch over safety of children. Our files tell a meaningful story of lost and despairing wrecks of girls led out of the shadows of crime and from the brink of destruction and suicide by the friendly hands of policewomen.”

“And nothing will stand between you and the unforeseen danger of your every assignment except what you’ve learned here at the academy. There’s a snub-nosed police revolver in your shoulder bags or under arm holsters that’s for your protection in emergency. Keep that in mind: for emergency only. Congratulations and good luck to each one of you.”

Given that Women from Headquarters is a bottom of the bill crime programmer from Republic Pictures, shot in only twelve days, one’s expectations would surely be low. Not so fast though — with a director like George Blair and with John MacBurnie behind the camera, it’s safe to raise the bar a little. By 1950 these cats, along with other members of Republic’s crime quickie crew (producer Stephen Auer, editor Harold Minter, etc.) had established a track record of modest but surprisingly good stuff (Streets of San Francisco, Post Office Investigator, Alias the Champ, Federal Agent at Large, Unmasked, and Destination Big House). All that being said, it’s a shame that Women from Headquarters falls short of expectations in just about every way imaginable.

Joyce Harper (Virginia Huston) and Ruby Kane (Barbra Fuller) have been struggling by on their own for years — Joyce practically raised the younger girl. But when the war came Joyce joined the Army nurses’ corps, leaving teenage Ruby without the crutch of an older role model. Now back together in Los Angeles, the two women (Ruby’s just turned 21) are trying to make a go of it as roommates in the brave new post-war world. At first glance, Ruby appears to be making out better. She’s got a nice gig hopping cars at a drive-in off Sunset and a steady boyfriend — though Joyce hardly approves. For her part, Joyce is struggling. She’s been bouncing from secretarial job to secretarial job, unattached and unable to find fulfilling work that doesn’t involved getting pawed by her bosses. She says early on, “when I got out of uniform I came back to a world I didn’t fit into. I felt sort of lost and unhappy in the work I’d done before.”

Joyce finally discovers her purpose on the night Ruby gets busted. Her motherly suspicions of the younger girl’s beau Max were well founded. While out on a date at a local watering hole (Ruby likes to get loaded) Max slips into the back room to negotiate a drug deal with the proprietor, leaving Ruby alone with her drink. When a drunken barfly tries to get fresh, Ruby tosses her highball in his face at precisely the moment a girl-boy cop team braces the bar on a routine check. Surprisingly, it’s Ruby who gets popped — the lady cop, Sergeant Rogers (Frances Charles), is prowling for suspected jailbait. Rogers puts Ruby in the backseat and drives her home to Joyce, who verifies the girl’s age and gets her off the hook. In the course of their conversation, Rogers gives Joyce the low-down on the LAPD and tells her she thinks she’d be a great fit.

Rogers wasn’t kidding either. Joyce churns her way through the LAPD academy and upon graduation is assigned to a plainclothes unit working directly out of headquarters. In her first few months on the job she amasses a record that would make Edmund Exley piss his pants: busting up high class gambling dens, saving kidnapped children, and chasing down bank robbers. Joyce even brings in a cop killer. Unfortunately all we get to see of her exploits are a montage of newspaper headlines and B roll of crooks on the run.

While all of this is happening Ruby is suspiciously absent from the movie. Following her near miss with the cops, she and Max bolt the Southland for Chicago. We don’t see her again until much later, after Joyce gets promoted to the narcotics squad. The headline-grabbing lady cop learns that her old friend has returned to California when she discovers her in the infirmary at the city jail, pregnant and battered by Max, now a hardcore felon. Sharing her tale of woe with her old pal, the naïve Ruby delivers the movie’s campiest line: “I was married to a criminal dope peddler.” Joyce agrees to get Ruby out of the clink if she rolls over on Max, who is then expected to stooge on his supplier, and on and on up the chain until Joyce can hopefully expose “Mr. Big.” Max’s paternal instincts kick in when he learns that Ruby is knocked up, and he happily spills on his bosses, leaving Joyce and her blue crew to move in and clean out the garbage.

I don’t know about you, but the two quotes set off at the top of the essay are worth getting excited about. They suggest a movie about female police officers more concerned with rolling their sleeves up and doing good work than with keeping their makeup on straight. Too bad for us, secretary turned cop Virginia Huston never wears a uniform or pounds a beat in this movie, and her face — delightful as it is — is always perfectly, and frustratingly, composed. In fact, she somehow manages to get through the picture almost entirely without showing off any real police work, and the early promise of those “despairing wrecks of girls” are left to the speeches, while that snub-nosed police revolver stays forever hidden in her shoulder bag.

Women from Headquarters’s promise as a film noir is wrapped up in Joyce’s feelings of angst at her return from the war, and her unusual career response to those feelings. This inability of the returning veteran to reintegrate into domestic society is one of the cornerstones of noir; it’s only too bad that the film doesn’t do more with it, though surely we have to award Republic some points for the gender switch. While Joyce’s response to her newfound malaise is to defy societal expectations by pursuing a potentially deadly job in the police force, she outwardly displays none of the angst or inner turmoil that we hope for. Certainly we can’t blame the actress. For what its worth, this is the same Virginia Huston who played Robert Mitchum’s girlfriend Ann in that noiriest of noirs, Out of the Past. Huston’s filmography lists only 13 roles, but the majority were top shelf projects. We have to believe she could act a little.

Possibly the failure is the normally excellent Blair’s. He allows his cast to stumble through, and fails to manipulate his camera and the lighting with same verve that I’d come to expect from him. In the end, this is an instance when we have to accept the shortcomings of B material and make allowances. The story is too plot driven and the reels are simply too few to allow for an A picture exploration into Joyce’s psyche. Regardless, while Women from Headquarters’s failure to rate as a film noir is forgivable, its failure to entertain isn’t. The promise of the subject matter gives me shivers, the noir-style character tropes are evident, and the thing moves along quickly enough, but it’s a sloppily rendered paint by numbers picture that isn’t particularly worth looking at. If you want to see somewhat similar material handled the right way, check out 1953’s Code Two.