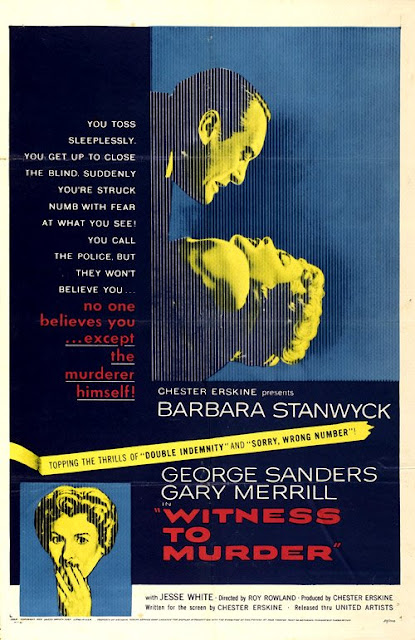 For a movie that goes out of its way to mock the television cop dramas of the day, the screenplay for 1954’s Witness to Murder is ironically conventional and topped off with cliché. In spite of this, and the fact that stars Stanwyck and Sanders are playing characters we’ve seen too many times already, the film is still a treat — owing primarily to the charisma of the actors and the film’s delicious use of light and shadow.


Barbara Stanwyck stars as Cheryl Draper, a stylish but aging urbanite staring down the barrel of spinsterhood. Her fiancé was shot down over Europe, and she’s been alone and lonely ever since. Awakened one night tossing and turning, Cheryl goes to her window and she sees man in an adjacent apartment building strangling a woman. She witnesses the final moments of the young girl’s life, as dead arms fall limp from the struggle and her corpse crumples to the floor. Cheryl telephones the police, and soon a black and white prowl car rolls up to her apartment building, the siren inexplicably (conveniently?) blaring. This alerts Richter, the killer (the lovably insidious George Sanders), who quickly stashes the body in a (conveniently?) vacant apartment next door. When the cops finally ring his bell, he convinces them that a mistake has been made, that Stanwyck couldn't have seen what she thinks she saw, and the glad-handing keystone cops are quick to believe him. 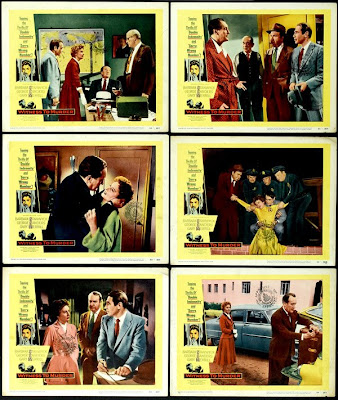 As it turns out, Richter, despite his perfect British accent, is that most nefarious of cinematic villains: a Nazi true believer (in this instance posing as an academic refugee). He’s making time with some rich hairbag in Palm Springs, so he can’t afford to have Stanwyck monkey-wreching his master plan. He sneaks into her apartment and composes threatening notes to himself on her typewriter. When she continues to badger the unbelieving cops, Richter hands over the notes, and the chief send Cheryl to the psychiatric wing for a night’s observation. Good-egg cop / suitor Gary Merrill eventually springs her, but not before Cheryl herself begins to believe she might have made the whole thing up.

By the time the dead girl is discovered in a vacant lot (a la Betty Short, cha ching!), Sanders has decided the best way to get clear of the whole mess will be if Cheryl jumps out the window of her apartment in a moment of suicidal despair. As Richter is going through the motions of explaining all of his intentions to his potential victim — a horrified Cheryl, Merrill is searching the dead girl’s flat for evidence, where they find one of Richter’s academic treatises hiding in a desk. Just as Richter is about to close the book on Cheryl, and Merrill is hauling ass to the rescue, she breaks free and flees the apartment building for a hi-rise construction site down the block. She races to the top with Richter groping at her heels, as Merrill crests the rooftop and saves the day, sending Richter to his death down an empty elevator shaft.

Although the story of Witness to Murder is terribly hackneyed, there are a few of aspects of the production that merit discussion. First is the lighting, which is arguably the most stylishly over the top in the all of film noir. It’s almost as if in an effort to combat demon television, legendary director of photography John Alton lit his shots to desperately exaggerated proportions. Although his work is always dramatic, (Raw Deal, Border Incident) none of his films approach such meticulously composed extremes of light and dark contrast. The work was almost certainly influential as well. Look no further than two Hitchcock films, Rear Window and Vertigo — though the similarity to the latter film is more striking, especially in the composition of the final sequences of both films, which involve high angle shots of figures ascending perilous sets of stairs.

The most exciting scene in Witness to Murder occurs when Cheryl is confined in the LA city hospital mental ward. She finds herself stranded along with three other women in a scene that is as eerie as it is expressionistic. An elderly woman quietly whispers a delusional mantra to herself, creating a monotonous rhythm that lasts the duration of the scene. She is joined by Jaunita Moore (Imitation of Life), painfully credited as “Negress,” who sings a soft and hypnotic blues number to herself, while a street smart broad cracks wise and gives Cheryl the lowdown on how to scheme the system for quick release. All while a Nurse Ratched type lurks, malevolently eyeballing Cheryl. The sequence is composed and lit beautifully, with each woman in turn throwing forbidding shadows upon the stark canvas of the back wall. Everything Cheryl sees is effectively exaggerated, and we know with the same certainty as she does that the doctors and nurses are not to be trusted. It’s a cynical take on the state of the mental health system, two full decades before McMurphy and the Chief started looking for a way out.

Witness to Murder is a worthwhile film just, but some aspects of the production play as desperate — the visuals have been exaggerated (it worked) and everything but the kitchen sink has been thrown into the story, including the ultimate: making the killer a Nazi for no reason germane to the story (it didn’t). Had more restraint been exercised, this would undoubtedly be regarded as a minor classic today.