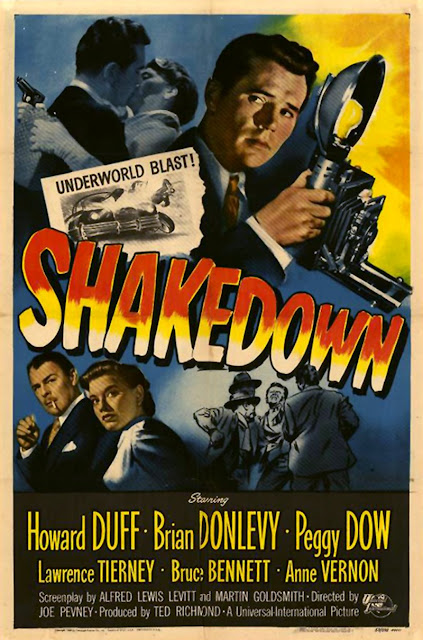 In Shakedown, Howard Duff plays the aptly named Jack Early, a driven news photographer out to make a name with one of the big San Francisco papers. His ambition is such that he’s willing to do anything in order to get his foot in the door, including taking a vicious beating. The film opens with verve: Early is chased along the waterfront by a group of hoodlums. Just before losing the footrace with the thugs, we see him round a corner and hastily stash his real camera while pulling a dummy rig from his coat pocket. The thugs throw the dummy off the pier and proceed to wallop the daylights out of Jack before tossing him into the path of an oncoming dock train. He staggers out of the way, retrieves his treasured camera from its hiding spot, and the scene cuts to his dark room where he appraises his handiwork, a series of freshly printed negatives. The snaps are good enough to land Early his dream job: a one-week tryout on the paper, which he quickly makes the most of.


The protagonist of Shakedown is the quintessential anti-hero. His flaws are so damning that he can only find redemption in death, and so apparent that his ultimate doom is never in question, the film moves determinedly towards Early’s date with destiny. Yet the more fascinating aspect of the film, and by extension film noir, is the way in which the second World War and its effects on American culture and the individual fighting man loom unspoken over the film. The implied wartime experiences of the male leads in post-war noir were so universally taken for granted by audiences that the protagonist’s combat record not only goes without saying, but his jaded and cynical attitude is intuitively understood. Having participated in the war first hand Early is so desensitized by his experiences that recording horrible images of carnage and calamity for an eager (and likewise numb) public seems a natural way to earn a living. His moral system has been so skewed by the war that he thinks nothing of exploiting his photographic ‘victims’ in order to make his images more sensational and consequently more attractive to his public. Their insatiable appetite for the sensational and their complicity in empowering Early makes his profession not just an acceptable meal ticket, but also a fast track to fame and fortune.

The character development of Jack Early occurs in two generally distinct phases: in the first third of Shakedown Early is a rising photographer, shooting those sorts of ubiquitous urban calamities like burning buildings or a smashed taxis, and using his warped sense of theater to create a more sensational tableau — by offering ‘direction’ to the woman in the window of the building and the man trying to escape the wrecked cab. These scenes in particular bring to mind the opening sequence of the 1952 Broderick Crawford film Scandal Sheet, in which reporter John Derek and shutterbug Harry Morgan glibly deceive and manipulate the distraught sister of a murder victim in order to get the most sensational and visually horrifying photograph possible. Both films deal indirectly with the ethics of journalism and the ways in which the blind ambition of the men in the news racket have powerful repercussions on public morality and the erosion of personal integrity.

The much more contrived second two-thirds show Early’s machinations after achieving success and some warped degree of professional notoriety. The transition happens when Jack receives a tip from a slick racketeer (Brian Donlevy) that places him in the ‘right place at the right time’ to snap a crew of department store heisters. Early gets the precious shot of the gang (led by Donlevy’s rival Lawrence Tierney) at the moment of their getaway. Instead of sharing the incriminating photograph with his editor or the authorities, Early burns the candle at both ends — providing his paper with an obscured image while using the clear shot to blackmail Tierney. Early’s big leap into full-blown criminality steers the narrative into more convoluted territory after he double- and triple-crosses his underworld contacts, each time believing an incriminating photo will keep him off the hook. The ironic and fatal flaw of Jack’s scheme is that while his plans are indeed logical, he fails to grasp that is not in the nature of hoodlums (particularly those brought to vivid life by Lawrence Tierney) to solve problems rationally. So in the end, Jack Early falls victim to one of the greatest character flaws of the film noir heel: he’s simply too smart for his own good.

And although in the ingeniously ironic climax he finds redemption, he lacks the good nature fate demands in order to allow one to save his own life.