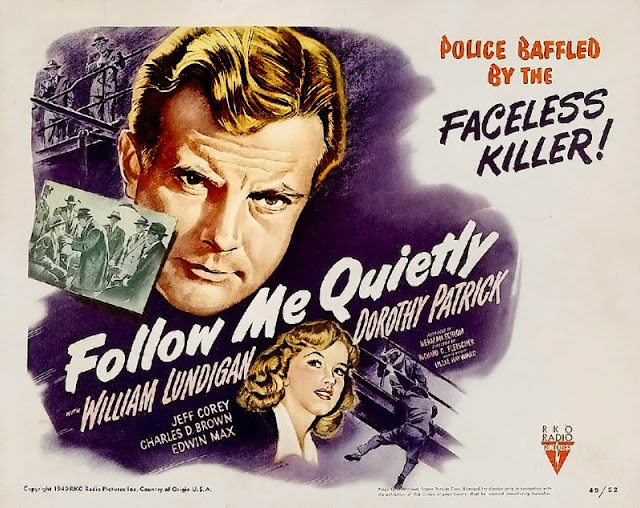 One of the troubling aspects of watching film noir pictures sixty years after their theatrical run is our tendency to overlook that the directors and producers of these movies weren’t aware of the scrutiny their work would eventually fall under. They didn’t have a “Film Noir for Dummies,” or some other silly thing to make sure their movies wrapped into neat little packages for film buffs examining them more than half a century later. What’s more is that unlike Westerns, which have both period and geography in common; or gangster films, which share specific character and narrative structures, noir films are considerably more ambiguous. There are few common threads that unite them (ironically, ambiguity being one of them—oh, and irony too), and there are certainly no hard and fast rules. As a matter of fact, much of the writing about film noir fails to even establish a working definition. Scholars and historians even seem unable to agree as to whether film noir is a genre, movement, cycle, or style. I’m with Eddie Muller on this—I’m not sure I care.

While Follow Me Quietly defies that image of a neat little package, it’s very much a film noir—and in some ways a textbook example. The story follows the police’s pursuit of “The Judge,” a serial strangler who claims his victims on dark and rainy nights. The lead detective on the case is played by William Lundigan, a cop obsessed: he broods over the case constantly, labors at his desk through the night, envisions his quarry when he closes his eyes, and bristles at the notion of being pulled from the case. When the police attempt a rudimentary criminal profile of the Judge by constructing a life-sized dummy, Lieutenant Harry Grant (Lundigan) catches himself secretly whispering his dark secrets to the thing. The movie begins with the police already deep into the investigation, though they’ve have made frustratingly little progress despite a wealth of forensic clues. Their evidence is stored in a glass curiosity cabinet near Lundigan’s desk, his shrine to the wanted man.

Although the obsessed cop is a noir archetype, and the defining characteristic of Follow Me Quietly, Lundigan fails to imbue Grant with anything approaching the neurotic vitality of say, Dana Andrews’ Mark McPherson in the earlier Laura. Contrary to his obsession, which the film asserts much more than it actually depicts, Grant appears well adjusted in his life away from work. Unlike McPherson, he pals around with other cops at the local watering hole, and is able to laugh at himself. His romantic connection with girl crime reporter Ann Gorman (Dorothy Patrick) is established early on and swells throughout the film; by the end their shared future is a given. Their healthy relationship, which doesn’t seem to fit comfortably into the film noir vernacular, is a holdover from the popular screwball mysteries of the previous decade—the kind of pictures that featured Glenda Farrell as Torchy Blane, the girl reporter with a cop boyfriend. This formulaic relationship captured and held the attention of film, radio, television, and comic strip audiences for decades. The inclusion of a female reporter allowed filmmakers to inject some romance into otherwise butch crime stories. Her press credentials conveniently provided her with access to crime scenes—which would allow her to aid her cop boyfriend in solving crimes. In Follow Me Quietly, it’s important for the resolution of the movie’s loose ends that the hard-nosed Grant eventually soften, and how else is he to do so, if not romantically? Even the stoic Mark McPherson got his girl in the end, and she started off that picture as a stiff.

In the last few decades, the serial killer has become a popular character type in American films. So much so that in recent decades Academy Awards for Best Actor and even Best Actress have been awarded to performers in the roles of serial killers. Modern film and television audiences are obsessed with criminal psychology, and are often more interested in the psyche of the killer than they are in the detectives who seek them. Convention thus requires current filmmakers to equip their malefactors with elaborate and appropriately traumatic backgrounds, so audiences will feel that they have the complete story and be able to empathize with the murderer on some level. With this sort of cultural conditioning in mind, the character of the Judge in Follow Me Quietly is frustrating. We never learn more about him than he tells us through the fetishes he leaves for the police at his crime scenes: calling cards with words and sentences formed from letters clipped from magazines, in which he announces to the city that he has “been ordained to destroy all evil. Beware!” Little more is divulged until the end, when viewers finally come face to face with the Judge. It’s evident that the killer’s identity and history were of little interest to the filmmakers, who were confident their audience felt the same as they did.

Unlike the mystery films of the thirties and early forties, to which this movie owes much, the killer turns out not to be the butler or the best friend, but a completely anonymous figure—another crucial point in understanding Follow Me Quietly as a film noir. The Judge turns out to be the boogeyman, a phantom, the hand of dreaded fate, a deadly instrument of bad luck preying on those who choose to reside in the “naked city.” That his victims have nothing in common, are clearly not “evil,” and are of both genders makes his deeds even more ominous. After all, even after his face is shown, he remains just another middle-aged schmuck in a suit, hat, and glasses. He’s no ogre, and there are a surely millions of others just like him. Ed Max, the actor who played the Judge, was probably cast for his slightly off-center looks more than for his acting ability. It’s his awful performance in the film’s climactic sequence that diminishes the experience more than anything else. 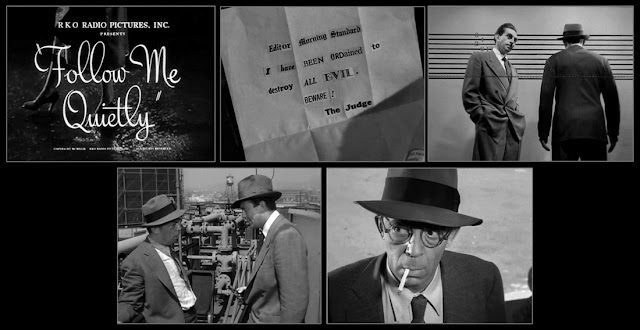 At only 59 minutes, the lion’s share of the running time is necessarily focused on plot development. To the film’s great credit, its lasting impression is not one of brevity, but rather of fullness. The well conceived story and workmanlike direction are bolstered by a striking visual atmosphere. Some movies announce themselves early on as noir films, and this is one of them: the opening titles play against a tight shot of Dorothy Patrick’s gams, as she paces nervously along a dark, rain-soaked street. The visual of the rain is often repeated to heighten the sense of tension that anticipates a Judge murder. Photographer Robert de Grasse’s excellent night work depicts a full tonal range with rich, deep blacks and vivid highlights. His foggy streets and lingering downpours suggest a world in which visibility is obscured, and danger lurks unseen around each corner. Atmosphere again reinforces narrative at the ultimate moment in the story. As the police finally uncover the identity of the Judge, and the hunter becomes the hunted, the skies above are clear and the screen washes over with a searing white daylight. The affect of this change in weather along with the suddenly deserted streets causes the Judge to flee for his life—he sniffs trouble as he mounts the stoop of his tenement; the cops lie in wait just inside. He flees to a vacant refinery, where he and Lundigan finally have it out. One of the film’s most noirish touches occurs in that moment when the Judge falls from a catwalk to his death: it isn’t Lieutenant Grant that stops him—it’s the ever-present hand of fate—proving that no killer is immune from the whims of destiny.

Most of the chatter about this film centers on its credentials as a film noir, and the jury appears to be locked. Popular consensus is a shoddy way of establishing a movie’s film noir credibility, and Follow Me Quietly has suffered from it. Despite an upbeat tone, a Hollywood ending, and no femme fatale; the movie features an alienated and obsessed detective, a killer who embodies the finality of anonymous, random, urban death, and a stylishly dark and oppressive mise-en-scène. Admittedly, it isn’t especially hardboiled, but it certainly comes up to snuff as a film noir. Put a Mark in the “yes” column.