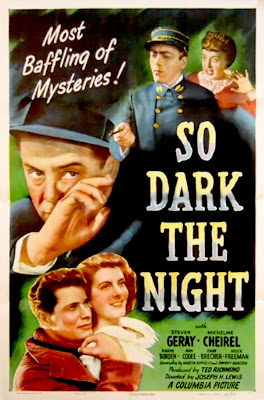 Just after the war director Joseph Lewis and cinematographer Burnett Guffey collaborated on two prototypical film noir pictures for Columbia’s B unit. Both My Name is Julia Ross and So Dark the Night are suspense thrillers set overseas. While neither is a full-fledged film noir, each film has definitive noirish elements — both in terms of Lewis’ conceptual handling of the material and Guffey’s visual style. Although neither man’s name would ever become part of the public consciousness, each made a significant impression in the realm of the crime film. Lewis would go on to direct numerous noir films, including two with iconic status: The Big Combo and Gun Crazy, though he wouldn’t work with Guffey on either. Guffey however had an incredibly bright future. He would hone his skills photographing a multitude of iconic noirs. In addition to Scandal Sheet, The Sniper, Human Desire, Convicted, and the extraordinary In a Lonely Place and The Reckless Moment, Guffey shot the Best Picture Winners All the King’s Men and From Here to Eternity, as well as indelible classics such as Birdman of Alcatraz and Bonnie and Clyde. The pair would cross paths one last time in 1949 on The Undercover Man with Glenn Ford and Nina Foch — the resulting film a noir programmer that ostensibly covers the same ground as The Untouchables. However if Lewis and Guffey ever struck gold together, it was with My Name is Julia Ross, a film that has risen in stature steadily throughout the decades.

My Name is Julia Ross concerns an elderly society widow, Mrs. Hughes, and her eerie, knife-obsessed son Ralph, who contrive to find a substitute for the wife that Ralph strangled during a psychotic fit. They plan to shanghai a young woman on the pretense of hiring her as a live-in secretary, and then pass her off as Marian, Ralph’s emotionally troubled and recently murdered wife. The pair’s ultimate goal is to snuff the young woman and make it appear that Marian has committed suicide — thus getting Ralph off the hook. The audience is let in on their plan within the first few minutes, and most of the story is concerned with the title character’s attempts at escape. Nina Foch is fine in that role, though it’s difficult to get through the film without once imagining the part in more versatile hands. Foch plays it with a bit of a poker face, and her British accent tends to come and go. May Whitty is dependable as the old bag and Macready is menacing as the son. Lewis and Guffey use visual style to accentuate the neurotic, unhinged aspects of Macready’s character throughout the film, often by photographing his face half in shadow. The same can be said to a lesser degree of Foch’s character, though the filmmakers never invest much of the narrative into any struggle she may have had with her own sanity, which is, perhaps, where they missed an opportunity. For Foch’s part she never seems to doubt herself — and the point is wasted about thirty minutes in when Julia conveniently overhears a conversation between her captors and gets wise.

Although the British setting gives the film the feel of a gothic mystery, and much of it is presented in that mode, the trappings of film noir are everywhere: Julia is an unwitting victim of fate, guilty of nothing more than answering an ad in the newspaper. But like the typical noir protagonist (in spite of her gender) she has difficulty in distinguishing between the benign and malevolent forces at play around her; and unable to properly anticipate danger, she’s forced to defensively react in order to save her life. Had the film been made just a few years later, it’s certain that more effort would have been placed in depicting her struggle with madness. The casting of an actress often described as aloof makes the portrayal of these struggles difficult.

Despite the low budget, and in a few shots because of it, the visual style is quite vivid, from the opening scene with a hand-held camera that tracks Foch as she walks through a downpour to her boarding house, to the expressionistic ending where Macready tries to lure her down a treacherous stairway. Although not entirely cohesive from start to finish, Guffey’s camera work shows the virtuosity that would make him the most dependable and prolific noir cinematographer of them all, not to mention the winner of two Academy Awards.

Made the following year and set in France, So Dark the Night tells the story of a famous Parisian police inspector, who after eleven years of solving cases finally takes a vacation, only to find himself on a busman’s holiday, investigating a string of murders centered around the residents of his country hotel. There’s a romantic angle to the killings, as the first victim is none other than the innkeeper’s daughter. Coincidentally, the dead girl has just agreed to marry the detective, in spite of their vast age difference and her already impending nuptials to the local Brom Bones, himself soon to be a victim. All roads lead toward the film’s climax, when a major plot twist is revealed. It’s the sort of development that may seem obvious to some viewers, while others may need to re-watch in search of clues. At any rate it stymies attempts to review the film, as practically every noirish morsel is wrapped up in the twist.

So Dark the Night is not a very good movie, and it suffers greatly because of its cast. Steven Geray is featured as inspector Henri Cassin. Hungarian actor Geray participated in nearly 200 Hollywood films, and although this was a routine project for him it did provide the almost unheard of opportunity to play the lead. He tries but comes up short: his acting underscores why he never managed larger parts. The supporting cast is disastrous. Lewis seems to be going through the motions, but despite numerous obstacles he’s able to grind out a watchable, modestly entertaining picture. Guffey as well makes the most of a bad situation. As other writers have noted, many of the shots of Geray’s character are filmed through windows, which become an integral prop in the climax, and central in understanding his character.

Film noir was still in its early stages in the mid-forties when Lewis and Guffey collaborated on My Name is Julia Ross and So Dark the Night. The European settings of these two films, Julia Ross in England and So Dark in France, may appear at first to be problematic in establishing them as film noirs, but it’s important to note that both productions are completely American — made by the second unit at a major studio and filmed entirely on lots and sound stages in California. If the settings themselves are troublesome, consider their place early in the cycle before passing judgment. My Name is Julia Ross is by far the better known of the pair, for numerous reasons — chief among them that it is simply a stronger movie. It also airs with some regularity on television, ensuring that many more viewers are aware of it. Over the years it has gained in reputation and has come to be considered one of the better B pictures of the 1940s. Much like another famous B project, The Narrow Margin, My Name is Julia Ross was given the remake treatment in the 80s, as Dead of Winter starring Roddy McDowell and Mary Steenburgen. So Dark the Night is currently only available as a bootleg, and is likely to stay that way.