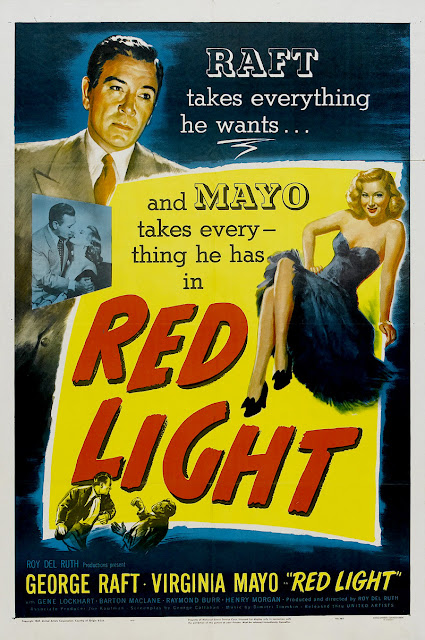 God must love crime films, because in 1949’s Red Light he gets in on the action.

What a strange and fascinating film. To look at the posters — or maybe they should be referred to as ‘marketing pieces,’ one would think this was a hardboiled film noir with sexy Virginia Mayo playing a manipulative femme fatale. Not so. Red Light is certainly hard boiled, sometimes even brutal…and it’s definitely a film noir….and Virginia Mayo is in it….but….she’s no femme fatale, and the most intriguing thing about the film is it’s religious message of faith and redemption. Huh?

Red Light concerns trucking company owner Johnny Torno (George Raft), hell bent for revenge after his kid brother, a priest, is murdered. Torno hasn’t seen him for years — Jess has just returned to his native San Francisco after surviving the war as the chaplain in a Japanese P.O.W. camp. Rich Johnny, who loves no one like he loves his brother, drops twenty grand for a new stained-glass window at the local parish just to celebrate. Meanwhile, up San Francisco Bay in the big Q, convict Nick Cherney (Raymond Burr) and his pal Rocky (Harry Morgan) catch Jess and Johnny’s reunion on the prison newsreel. Turns out Nick is doing a four-year jolt for embezzling funds from the trucking company — though in his mind he was just ‘borrowing.’ Knowing Rocky gets out the next day, Nick gives his him some of the stolen loot to push the button on Jess. Rocky shows up at the priest’s hotel late the next night, tells him “Here’s a present from Nick” and starts blasting. Johnny shows up to find Jess sprawled on the floor, and pleads with him to name the shooter. Jess can only manage “The Bible, I wrote it in the Bible” before he fades away.

Johnny grabs his brother’s personal Bible, but in the hours that follow he can discover nothing that could indicate his killer. It then occurs to Johnny that Jess may have meant the Gideon Bible from the nightstand. (His assumption turns out to be correct, but this is the film’s biggest plot hole. Why would a dying priest go to the nightstand for the Gideon Bible when his treasured personal copy is close at hand? Why would he then put it back? How could he do it without getting blood on the Bible? Finally, How could he find the right page in an unfamiliar Bible in a pitch-dark room?) Johnny returns to the hotel to check the Bible, but finds that it has been taken. He bribes a bellhop to get him a list of people who stayed in the room in the intervening days. The next hour of the film finds Johnny chasing down leads as he tries to recover the missing book. The first name on his list turns out to be showgirl Virginia Mayo, whose own brother had been in the P.O.W. camp with Jess. She doesn’t have the book, but feeling sorry for Johnny she signs on to be his conscience / doormat for the rest of the picture.

Nick is released shortly after Rocky, and when he too learns about Jess’s final words, he becomes frantic to locate the phantom bible before Johnny. With Jess dead, the only other person who can incriminate Nick is Rocky, so he tosses the little guy off the back of a moving train; and when Johnny’s best friend catches him snooping at the trucking company Nick drops an eight-ton trailer on him (in his own way, Burr was something special). Nick, Johnny, and the cops are all together when the bible finally surfaces. What’s written inside? Not much. Jess only managed to write, “Johnny, Thou shalt not kill” and circle the passage from Romans where God reminds folks that he’s the only one in the revenge business. Nick breathes an all-too-brief sigh of relief, before a trenchcoated Lazarus, in the form of Rocky, staggers in and points the finger at Nick, who starts shooting and makes a beeline for the roof, with Johnny hot on his heels. The two men play a game of cat and mouse through the trucking company’s gigantic neon sign — and when Johnny finally gets the drop on Nick he hears Jess’s voice in his ear, and can’t pull the trigger. Then, as if nudged by God, Nick takes a wrong step and is electrocuted by an exposed wire, before falling into the blackness below. The moment is presented to suggest some serious divine intervention, as well as a Holy endorsement of capital punishment, as if God swooped down and said, “Let me take care of this scumbag.” Nick’s death is unmistakably multi-faceted: first he is electrocuted (man) before plummeting into the hungry abyss (God).

Themes and content aside for a moment, the most significant thing about Red Light is how beautifully lit and photographed it is. Bert Glennon, whose name is more familiar to fans of Westerns (They Died with Their Boots On, Stagecoach, Rio Grande, Young Mr. Lincoln, and many others.), crafts an exhilarating visual feast in one of his only noir outings. Each shot is artfully composed (some evoke Edward Hopper), with obvious attention given to the placement of actors, props, and lights. Glennon uses on- and off-camera lighting schemes to great effect, and gives most scenes a full tonal range, with deep, rich, blacks and vivid highlights. The most striking element of his work is the value he assigns to shadows in his compositions — in less beautiful film noirs the shadows fall where they fall and the director of photography wants to capture them; Glennon does all of this, but goes a step farther: he anticipates the shadows and positions physical elements around them, which lends them infinitely more cinematic power. The effect is wonderful — a shot of Raft hunched over his desk becomes an indelible. The final, all too brief, struggle at the neon sign between Raft and Burr is one of the best in all of film noir. The interaction with the prop is choreographed and filmed beautifully, and the affect is worth the price of admission.

Raft, though never considered a great actor, is a good fit for the part of John Torno. His signature stiffness perfectly suited the role of hard-nosed entrepreneur who raised a kid brother while building a business from scratch. Raft transitions well from humorless businessman to revenge seeking tough guy. Raymond Burr and Harry Morgan make an incredible pair. Burr was able to personify sadism and viciousness to an extent that is impressive even for him, while Morgan is a great toady-cum-hatchet man. If anyone seems out of place it’s Virginia Mayo — as beautiful here as ever. Her character adds little to the story, other than giving Raft someone to slap in one of the film’s more shocking moments, and it’s possible that she’s only in the film because no matter what — there has to be a girl.

Red Light is a curious movie, and would be a welcome addition to home video for any number of reasons. Skilled filmmakers and performers carefully craft practically every facet of the film, from the exceptional camera work and performances to the editing and music. The story is certainly offbeat — some viewers may quibble with the religious message, though it merits careful consideration as to how seamlessly such themes are integrated into the pervasively downbeat noir framework. Studio pictures from this era are typically derivative and almost wholly unoriginal, it’s quite refreshing to discover a film that takes the trappings of film noir and applies them in a unique way.

Post Script: There’s a fine review of Red Light by Raft scholar Stone Wallace posted at Steve-O’s Noir of the Week site. Wallace focuses on the performances while I was struck more by the photography.

Post Post Script: Here I go again. It’s understandable that the excellent team that generates the capsule reviews for Leonard Maltin’s Classic Movie Guide can not have seen all 9,000 films profiled in the book, but in this era of information it seems odd that they can’t at least fake it a bit better. Their capsule for Red Light reads as follows: “Turgid drama of innocent Raft seeking revenge when freed from prison, hunting brother’s killer.” Freed from prison? In addition to the misinformation in the summary, I wouldn't call the film turgid. I also think their rating of ** is a star short — if they had actually seen Red Light, I'm sure they’d agree.