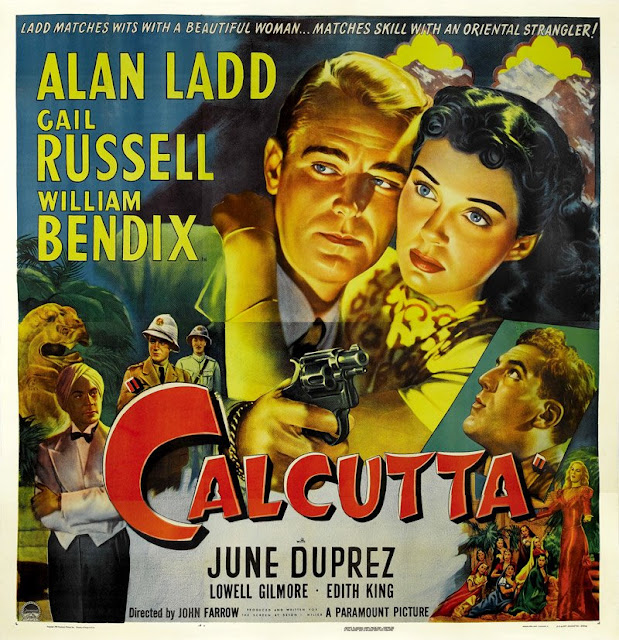 It’s easy to understand why the studio bosses at Paramount would pair Gail Russell with Alan Ladd in Calcutta. She seems to fit the same mold as Veronica Lake, with whom Ladd struck gold on numerous occasions — beautiful, reserved, demure, and vulnerable. Russell was only hampered by her nerves. She was cripplingly shy and suffered from what today would certainly be called a severe social anxiety disorder. Her story is one of Hollywood’s saddest. She was discovered while still in high school and placed under contract with Paramount as soon as she got her diploma. Her beauty was special in that she bore no particular resemblance to any existing famous faces. Her doe eyes, high cheekbones, and full lips were hers alone, and Paramount had high hopes. They cultivated her acting skills and brought her along slowly, but whether it was due to a lack of talent or her personal difficulties she never caught on. She worked on a few big projects, including Angel and the Badman and Wake of the Red Witch opposite John Wayne and The Unseen with Joel McCrea, but despite the many opportunities afforded by her looks and a certain magically ethereal quality she was never able to break into true stardom. She only found the courage to get in front of the camera through alcohol, and eventually got popped by the LAPD for driving drunk. In a testament to her personality, numerous people from the industry, including Wayne, tried to help her get past her troubles, but it wasn’t in the cards. Russell died from a heart attack in a low rent Hollywood apartment at the lamentable age of 36.

The miscasting of Gail Russell is the most obvious problem with Calcutta, but it bears pointing out that replacing her with Lake would have been unlikely to salvage the picture. Lake too, being that she and Russell were somewhat similar types, would have been miscast in the role of femme fatale Virginia Moore. That’s not to say that a demure, even girlish, leading lady couldn’t be effective as a black widow in the right picture — think Jane Greer — but it doesn’t work here. Russell was cast because the producers were hoping her type would once again strike lightning against Ladd’s brooding hero. However the exotic mystique of a film such as this demands an equally exotic leading lady — a highly sexualized, larger than life type: Hayworth, Mayo, Gardner — maybe even the other Russell, you get the idea. Not Gail Russell, not Lake, not even Greer. Someone involved in the production recognized this early on and tried to spice up the movie with a sexy second lead. In this case it’s June Duprez, who outshines Russell by a mile and only makes her look worse by comparison. Duprez, who even resembles Russell (it gets confusing, they should have given her part to a blonde), gives the film a shot in the arm and has a real spark with Ladd. 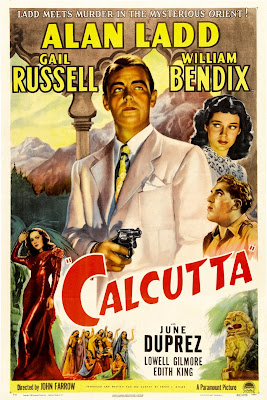 In 1947 Alan Ladd was still on top of the world. He looks great in Calcutta, like a man who is in his prime and knows it. He is very comfortable playing the brooding, morose, tightly wound hero who seems to have no time for women and is struggling inwardly to get over the war. (Ladd was practically playing himself here.) The film casts him as Neale Gordon, American ex-pat pilot now flying the Chungking to Calcutta route with air corps buddies Pedro (William Bendix) and Bill (John Whitney). When Bill turns up strangled, Neale and Pedro take a leave of absence from the airline to hunt for his killer. They get mixed up in all sorts of far eastern intrigue and cross paths with a variety of colorful Indian habitués, from the colonial authorities to urbane casino owners to native jewelry smugglers. Neale also gets involved with Virginia (Russell), who was engaged to Bill and knows more about his death than she lets on. One of the popular conventions of film noir, so far as bad girls are concerned, is that the hero’s first impression of the woman tends to be correct—even if she initially manages to pull the wool over his eyes. That’s certainly the case here, and it plays out through a good deal of the running time. Neale’s first impression of his dead buddy’s girl is that she’s a no-good gold digger, though her girl-next-door facade thaws him out as they get to know each other better. In Calcutta’s best use of irony, she helps him get to the bottom of the mystery, all the while aware of her own culpability.

In the end Calcutta is little more than a routine potboiler. John Farrow’s direction and John Seitz’s cinematography are competent yet uninspired — disappointing considering that each made numerous quality film noirs, including two pretty good ones together: The Big Clock and Night Has a Thousand Eyes. Farrow’s pacing is a too deliberate and the middle of the picture drags. Seitz does a fine job of masking the back lot locations, though he isn’t able to reproduce any of the exhilaratingly noirish shots of The Big Clock. There are some good lines in Seton Miller’s script, though there aren’t nearly enough of them. The best one comes in Ladd and Russell’s first scene, when she tells him he’s “cold, sadistic, and egotistical.” His response, “Maybe, but I’m still alive.” With the exception of Russell the cast is fine, though the two brightest spots, Bendix and Duprez, don’t get nearly the screen time they deserve. There are lengthy stretches that unfortunately contrive to keep big Bill out of the film, ostensibly for the sake of romantic scenes between Ladd and Russell. But as was often the case with Ladd and Bendix, their movies only got going when they were on the screen together. Their chemistry is obvious in each of the eight films they made together and it’s nice to see them on the same side of the fence for once. If the forties had a character actor with more vitality than Bendix, I’m at least certain that Bill could take him in a fistfight.