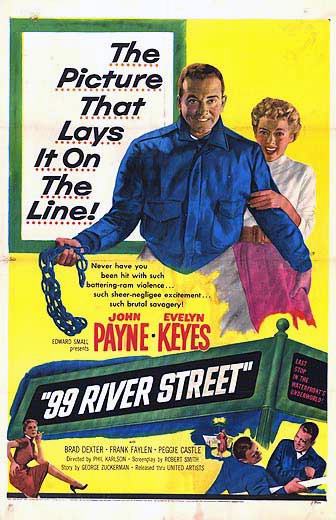 “There are worse things than murder. You can kill someone an inch at a time.”


Dig this: you’re a prizefighter in the heavyweight division — a real comer after more than sixty bouts, never once knocked down­ — and you finally get a shot at the greatest crown in sports. Going into the last round up on all cards, you get a deep cut from an accidental bump and the ringside doc sends you to the showers — the loser. As if that weren’t enough, the state athletic commission bars you for life, claiming that another hard pop could punch your ticket. Three years later you pay the rent driving a cab through the five boroughs, and not one of your fares gives you a second glance. Your nag of wife has been working too many late nights, and now she’s flashing jewelry that you didn’t buy her — maybe that’s what you get for marrying a showgirl. You’re a nobody. A sucker. Just another schmuck in the big apple.

That’s how it is for Ernie Driscoll at the beginning of 99 River Street — one of the most hardboiled, brutal, and inexplicably forgotten films of the noir cycle. Self-pity is the deadliest of emotions and it defines Driscoll. There’s a certain kind of guy who, having fought for the heavyweight crown and lost on an accidental cut, would strut through life like a big shot. He’d hit the bars after his shift to tell fight stories and relive the good old days — jabbing and hooking to the applause of drunks and floozies. John Payne’s Driscoll isn’t that guy. Instead, after coming so close and having it all snatched away, he’s a bitter, brooding, short-tempered hulk who considers his ring years a waste. Yet he’s also like the schoolgirl who’s had her heart broken — not eager to stick his chin out again. So what’s a guy like him, stumbling through life in a daze, angry at the world and hating himself for it, choose for a dream? He wants to buy a gas station. Saving up his tips to pump gas along some suburban highway is an absurd an ambition for a man who recently stood toe to toe with the champ, but everyone, including Ernie, knows he’ll probably never make it happen. Driscoll is a man devoured by his own failures, consumed by self pity. Payne’s performance sweats with pathos and verisimilitude.
The story is a knockout. Phil Karlson takes a complicated script and delivers a fast-paced and coherent movie that plows ahead with well-drawn, convincing characters. A plot summary would read like an unwieldy mishmash so I’ll omit it — and besides, some of the film’s best moments are meant to surprise. The picture opens with first-rate ring footage where a beefed-out Payne makes like a real fighter. Heads snap from punches that resound with the crash of hammer blows. In one of 99’s clever directorial nuances, what at first appears to be a live event turns out to be a televised ‘classic fights’ rerun that Ernie is watching on the small set in his dingy flat. Payne is transformed from hero to hangdog with one simple camera movement. Wife Pauline, played by Peggie Castle, turns the set off in a bickering exchange that is pure Dana Andrews and Virginia Mayo: “I’d have been a star if I hadn’t married you,” she says, and he fires back, “You were a showgirl — I could have been champion.” To which she smirks with venom and sarcasm, “Could have been.” Ernie then shuffles off to his cab for a night that will change his life forever. Before the sun rises again he’ll discover the truth about his marriage, and then scramble to steer clear of cops and crooks after Pauline turns up stiff in the back seat of his taxi. 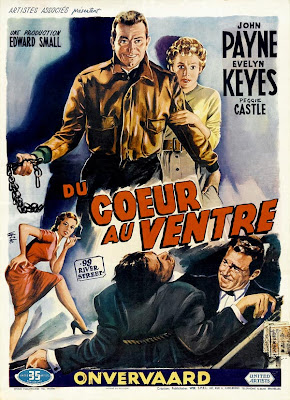 The supporting cast is made up of a broad pastiche of downtown night dwellers — from hoodlums and hustlers to philanderers and insomniacs. Whether through lucky casting or plain good direction each role is strikingly realized. Evelyn Keyes, coffee shop habitué and Broadway wannabe, is Linda, the gal pal who makes a chump out of Ernie (in the film’s slickest and, possibly, most memorable scene) and then has to get square. Fighters and their trainers are never far apart in classic films, so it makes sense that Ernie’s best friend and former corner man is also his dispatcher at the cab company. Frank Faylen (who in a strange bit of movie serendipity played a cab driver named Ernie in It’s A Wonderful Life) is Driscoll’s pal and confidant, though his part is the least colorful in the cast. Brad Dexter plays John Rawlins, the reptilian jewel thief who cuckolds Driscoll. He’s even more memorable here than he was three years earlier as a crooked investigator in Huston’s The Asphalt Jungle. Both parts call for the same sort of viperous scumbag, but Dexter is better in this film if for no other reason than his role has more meat. The best support in the film is offered by Jay Adler as Christopher, pet shop owner by day and big time jewelry fence after dark. Adler, with his quiet demeanor and air of almost grandfatherly respectability, makes Christopher into the most coolly terrifying presence in the film. Even amongst such a strong cast Adler is the scene-stealer.
The film’s brutality is plentiful and vividly cinematic. Films of this period often age poorly due to the artificial quality of their violence. Not so here. From the beginning boxing match to the climactic sequence at the titular address, the punches, slaps, gunshots, and crashes are unusually authentic. Blood spreads across cheeks and foreheads with surprising regularity and loving care. The film embraces the spectacular physicality of criminal life, and lingers blithely on those moments. Jack Lambert plays in many of those scenes, his face instantly recognizable as one of the more grotesque hoodlums in film history. Here he’s Mickey, an ambitious young thug who works for Christopher. In once scene, Pauline and Rawlins visit the pet store that serves as Christopher’s front. As they enter Mickey feeds milk to a puppy from a baby’s bottle, but within minutes he’s slapping Pauline to the floor while holding Rawlins at bay with a .38. Later he gives Driscoll the third degree, punctuating each question with a heavy chop, Ernie’s head jarring from one side of the screen to the other. Yet Mickey takes the beating of his life when he discovers, the hard way, that Driscoll was just waiting for an opening. Ernie makes the hoodlum pay for not remembering him as he unloads every ounce of pent up frustration onto poor Mickey’s face — and we get to see every punch. The closing set piece is potent and rewarding, and includes one of the best “deaths by car” in noir history, as well as an operatic climax where cruel fate finally rewards Driscoll: he’s shot, he’s exhausted, and he’s nearly broken, yet he’s given the chance to rise to his feet and answer that bell one final time.
Within the canon of film noir there are numerous fight films — from the famous Body and Soul and The Set-Up to the slightly less well known, yet equally brilliant, Champion with Kirk Douglas. 99 River Street isn’t a boxing film per se, but it is a story concerned with a boxer whose life and sense of self are defined by the events of one fateful night in the ring. In part what makes noir films so wonderful is their oppressive atmosphere of alienation and menace. However that atmosphere needn’t carry beyond the conclusion of the story — the film noir hero can occasionally live happily ever after. The doomed lovers from such archetypical examples as Criss-Cross, Double Indemnity, and Out of the Past don’t survive their respective films, yet despite the extraordinary popularity of those pictures they represent a fairly small percentage of noirs where the protagonist doesn’t end up alive, kicking, and somehow redeemed through his ordeal. For every cocksure Walter Neff who deserves the hand fate deals him there’s an Ernie Driscoll who endures circumstances worthy of Job in order to claim his own fair share of redemption. 99 River Street screams “Look at this sap. Life gave him a kick in the teeth and he deserves better, but brother, he’s gotta pay for it.” Things are grim for Ernie in the beginning and they get worse as the reels unspool, but the same narrative convention that assures us Walter Neff will get his in the end also promises that Driscoll will come out on the other side, and that payoff is what keeps us watching. We ache for slobs like Ernie — we want to see him get clear of his bad luck and find some sort of happiness. Despite its violence, cruelty, and capricious fates, in the end 99 River Street reveals itself to be a film that rewards our hopes.
99 River Street (1950)