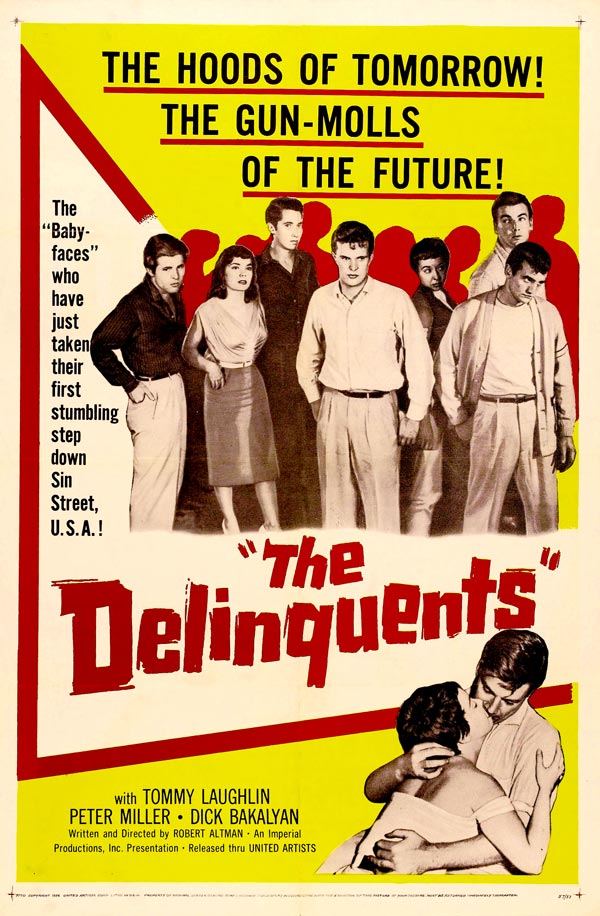 Filmed on the cheap in his hometown of Kansas City, Robert Altman’s first full-length feature is Eisenhower-era drive-in fare on the perils drinking, dancing, and “going steady.” The film features a cast of unknowns (and amateurs) balanced with professionals in key parts. The most notable acting presence in The Delinquents is that of Tom Laughlin, Billy Jack of seventies drive-in fame, in his first starring role. Also worth mentioning is Rosemary Howard, who plays Laughlin’s star-crossed girlfriend. I single her out not for her terrible performance (it would be her first and last), but for her uncanny resemblance to later Altman heroines — most notably Shelly Duvall. 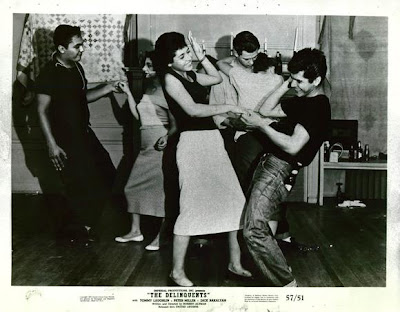 I was excited to watch The Delinquents because I wanted to see if I could pin down the “Altman” in it. It’s very curious to look at a film like this knowing that the director (of whom I’m admittedly a little ambivalent) would go on to craft films that couldn’t be philosophically situated further from this one. Would there be any satire? Maybe some tongue-in-cheek? Alas, I was disappointed because the only recognizable characteristic of Altman present here is his promise as a storyteller. Unlike similar independent cheapies, Altman’s story and screenplay are thoughtfully constructed, with the resulting product being surprisingly cohesive and resolved — while remaining bound to conventional narrative construction. While it’s telling to applaud a film for simply making sense from start to finish, that simple accomplishment wasn’t often achieved in the teenage exploitation films of the day. The Delinquents is a ‘teenpix’ genre movie — understandably conventional and derivative, done in earnest, with many of the directorial decisions obviously dictated by such external concerns as budget, location, and talent. That’s not to imply that the film is diminished by the lack of Altman’s mature signature, or that Altman’s later work is betrayed by such a beginning — a mainstream “exploitation” film with conservative underpinnings.

The story features a Romeo and Juliet angle — except instead of doomed young Italians we have a pair so WASPy and all-American that one can practically see the Popsicle sticks shoved up their backsides. Scotty White is a Wally Cleaver-type who is all busted up because cute Janice Wilson’s father won’t let them go steady — she’s only sixteen. Although Scotty is a clean-cut boy from a good family Janice has begun to openly fantasize about someday getting married and starting a family. Both youngsters assure Janice’s parents that their relationship is completely above board and that they haven’t “done anything” yet, but Mr. Wilson nonetheless forbids the two from seeing one another. In a fit of angst, Scotty heads for the drive-in all by himself, where instead of watching the picture he sits behind the wheel with his head in his hands. 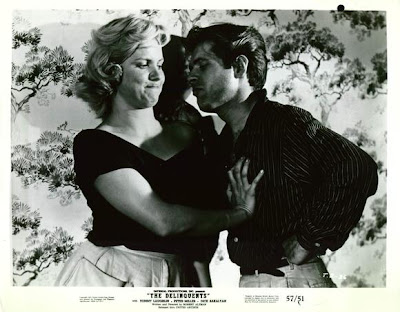 As fate would have it, he pulls in beside a gang of kids from the wrong side of Maple. Behind the wheel sits Bill Charters (Peter Miller) with his pal Eddy (Richard Bakalyan) and their bunch of cronies. While Bill’s blonde hair and spot in driver’s seat mark him as the leader of the gang, Eddy is clearly the riff-raff. His pompadour is a smidge more oily and unkempt than the others, and the phallic switchblade that completes his get-up never stays in his pants for long. Bill’s smooth confidence and sense of entitlement makes everyone feel safe and special while Eddy’s frayed and manic presence makes running with this crowd coolly dangerous.

While this bunch appears to have eaten just as many Wonder Bread sandwiches as Scotty, they are bent on drinking, necking, and paying no more attention to the movie than he is. In films like The Delinquents the bad kids can’t sit still for long — they need to have “fun.” The stage is set when Eddy notices some teens in another car parked a few rows away he and Bill recently “beefed” with. Eddy slinks behind their car and pops their back tire before hotfooting it to Bill’s convertible with a crowd giving chase. As he rounds the corner Eddy gets the inspired notion to throw open the door to Scotty’s sedan and crawl through, making it appear as if our boy was the vandal. Scotty is consequently yanked from his car and walloped before Bill, Eddy, and pals make the scene for an all-out rumble. Despite being shell-shocked Scotty comports himself well, which impresses Bill and leads to a quick friendship between the two. Realizing his error, a threatened Eddy begins to mull over the ramifications of this new friendship.

When Bill hears about Scotty’s girl trouble, he offers to pick Janice up for a sham date and deliver her to Scotty. Feeling indebted, Scotty agrees to bring Janice a wild party of Bill’s at an abandoned house. After only a few minutes a shocked Janice begs to leave — the other teens are shaking and shimmying a la Baby and Johnny, and crude Eddy is making her out to be a square — they don’t even have Coca-Cola at this party. She races for the door with Scotty in tow. Shortly afterwards the police crash in, leaving Bill and Eddy thinking Scotty ratted them out.

The next day they waylay Scotty and force him to drink whiskey. Their plan is to get him stinking drunk and then drive him somewhere to be cut up and dumped. At a service station Eddy gets the idea to crack the till while the attendant is busy fueling the car. Things go wrong and Eddy brains the guy with the gasoline nozzle while Scotty staggers away in the confusion. Having let him escape the gang decides to grab Janice to ensure Scotty stays mum on the heist. When Scotty learns of Janice’s abduction he runs wild — and the resulting confrontations are really entertaining. Scotty and Eddy mix it up on the front lawn of Scotty’s house, with Scotty choking out the greaser in a scene that looks a lot like the famous Mel Gibson / Gary Busey pissing contest outside Danny Glover’s place. Scotty finds Bill just before the police do, and its Bill that jerks a knife as they duke it out in a cramped kitchen. Scotty’s one-two outlasts Bill’s switchblade in a surprisingly bloody climax. The picture closes on the steps of the police station, with parents arriving to escort their children home as a narrator cautions against not only the “disease” of delinquency, but also any disobedience to civil and spiritual authority.