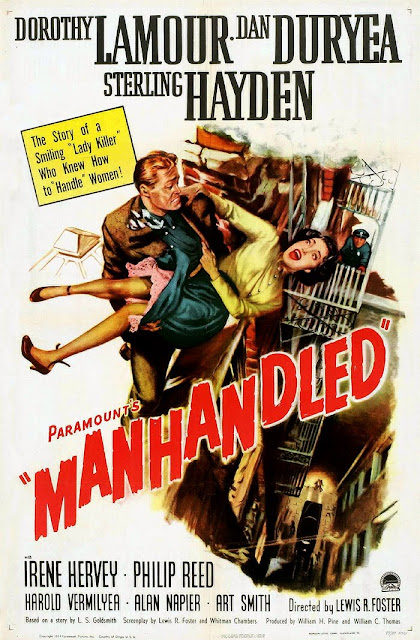 
The titles roll against a rain-smeared window, the night pushing hard against the glass. Inside, a man sits in a well-appointed chair. We see him only from the knees down; pajamas and slippers: posh. One hand hangs limp, trapping a cigarette burnt down to his knuckles. This is no stiff — dead men don’t smoke — he’s waiting up. The apartment door opens and couple enters. Again, only their legs. They exchange a hushed goodnight, a lover’s goodnight, and then she slinks upstairs while the man in the chair stirs, shredding the cigarette in his shaking hands. She settles at her vanity, admires herself in the mirror — finally we see a face. She’s a doll: all done up and covered in jewels — but no rock on her finger. The sleeper appears in the mirror behind her — dig the flowery pattern on his robe: silly, weak, feminine. He’s a cuckold, a patsy — though an unwilling one. He calls her a roundheels and threatens to kill her. She scoffs. He grabs a heavy perfume bottle and goes to work, his free arm wrenching her up from the chair. A few fevered moments later her lifeless body slumps to the floor, and the camera pans up to his sweaty, overwrought face. The scene melts away, only to reappear in a luxurious, wood paneled office. We see our killer, one hand clasped to his forehead, a bourbon rattling in the other, explaining to his shrink that the whole thing was just a bad dream…


That’s how you open a noir picture. Dark, tense, stylish — and with a murder. The title, Manhandled, shouts hard-boiled, and the poster is a gem: Dan Duryea dangles a flailing Dorothy Lamour from a rooftop, threatening to plunge her into the shadowy alley below, as the flatfoots look up from fire escape. Audiences should have been greedy with expectation when they took their seats in May of 1949, especially after such a tantalizing opening. The problem with Manhandled is that after those great first moments it goes steadily downhill, its grip slackening away to almost nothing. Its lasting impression is of a rote exercise in factory B moviemaking, offering audiences little more than an overly complicated and formulaic story of red herrings and diamond-encrusted MacGuffins — a parlor mystery two-decades old dusted off and resuscitated for the world of film noir. It’s too bad; this is a picture that had a ton of promise and a pair of bang-up actors.


The cast here is conspicuous, but let’s not put the cart before the horse. The story is far too convoluted to waste much time on, but some rudimentary description is apropos. The bluebeard wannabe is Alton Bennet (Alan Napier), an over-the-hill writer used to the high life, though he no longer rates even a modest advance from his publisher. His wife Ruth (Irene Hervey) is of the trophy variety, younger than her husband by two decades, and clearly won when his books were stacked high in the window facing the sidewalk rather than the bargain bin. She owns her jewelry free and clear, and the insurance policy on the stuff now shines a great deal more brightly than Bennet’s literary star. He’s been imagining her murder in his dreams and decides to tell his shrink Dr. Redman (Harold Vermilyea). In the dark about the Dictaphone and doctor-patient privilege, Redman employs transcriptionist Merl Kramer (Dorothy Lamour) to take down every word his patients say. Merl is newly arrived from the west coast. We never learn why, but she’s alone in New York after leaving her baby girl back home with granny. She’s friendly with Karl Benson (Dan Duryea), a low-life private detective who keeps a shabby office on the floor below her. He gets paid sticking a camera through bedroom windows — and over dinner Merl spills the beans to him about Bennet’s dream.


Across town, Dr. Redman invites Ruth Bennet to his office and warns her about her husband's dreams. Her oily boyfriend Guy (Philip Reed) is on his leash right behind her, and he too gets wise, bringing the number of legitimate suspects in her eventual killing to five! Ruth is finally murdered that evening, and while Benson somehow gets his hands on the jewelry, he appears genuinely surprised when his fence tells him there’s a murder rap hanging over the loot. Did Bennet confide in Dr. Redman simply to create an alibi for himself? Or did one of the many possible suspects who heard about the dream decide to take advantage in order to make a big score?


The following morning dawns at the murder scene, cops swarming around like bees in a hive. Police lieutenant Dawson (Art Smith) and insurance man Joe Cooper (Sterling Hayden) jockey for control of the situation. The rest of Manhandled is concerned with plot — the focus shifting from suspect to suspect, as Dawson and Cooper bicker over the best way to get to the bottom of things. There are twists, turns, double-crosses, and a little romance (all more tedious than it sounds) as we gradually discover the truth. It all leads up to the climactic moment depicted on the poster — the one with Merl on the brink of doom and clawing at Benson for dear life.


Let’s get back to the cast. Dorothy Lamour’s name is not usually associated with noir — other than a part in 1940’s Johnny Apollo this was it for her. At 35 she was at the tail end of her film career. Following Manhandled audiences wouldn’t see her again for three years, when she was featured in a pair of 1952 films: the notorious Best Picture winner The Greatest Show on Earth and The Road to Bali, one last tired fling with Bob and Bing. Her only other good part came a decade later in 1963’s Donovan’s Reef. Everyone except Duryea is mediocre in Manhandled — though Lamour is the only performer miscast. Outside of her comfort zone and unable to rely on her lovely figure, her singing voice, or her talent for comedy she gets lost, leaving audiences wondering if her casting was solely for marquee value. In that last dramatic scene on the roof she gets the chance to really act — and falls short. Her mouth moves and she spits out the words, but the rest of her face remains dead, especially her eyes. She just wasn’t cut out for material like this.


If only there were more to say about Sterling Hayden, but in just his fifth film he’s ill-used and frankly, extraneous. He doesn’t surface until more than thirty minutes in, and then he barely registers. One of the lasting lessons of film noir is that a lone, relentless police officer is much more captivating than a gaggle of bickering cops, but the latter is what Manhandled offers. This would be a markedly better film if either Art Smith or Hayden had been written out of the script — preferably Smith, apparently brought in to inject some comedy into the film, each instance of which is just miserable. Manhandled’s few comedic moments, mostly involving a prowl car with no brakes, represent the most oft-cited reason for its failure to score as a significant noir. At any rate, Hayden was on the cusp: his next job would be The Asphalt Jungle, which would cement his big-time screen persona. He’s unsure of himself in Manhandled, giving us a character that is unkempt and upbeat, similar to the newspapermen played by guys like Ronald Reagan earlier in the decade. If a rewrite had strengthened his part while eliminating Smith’s, this thing may have really taken off. Anyone who doubts the ability of the director to draw out a performer should watch Hayden in a double-bill of Manhandled and The Asphalt Jungle. The growth from one picture to the next is stunning.


Dan Duryea’s jovial, immoral scumbag is Manhandled’s saving grace. His presence goes a long way to keeping viewers invested when the going gets tough. One moment in particular is absolutely phenomenal, and is as powerfully noirish — albeit subtly — as you’ll find anywhere: Karl Benson has just learned of Bennet’s dream, and he stretches out in his office, lost in thought. The sounds of the city creep in through an open window: a woman’s laughter, a car horn. Reclined with one arm behind his pillow, Benson’s head lolls toward the window as he mutters an annoyed “Shaddup,” and “Quiet” to no one in particular. Restlessly chewing a mouthful of gum, his eyes never leave the cheap table at the foot of his Murphy bed, where a pet hamster churns determinedly in the exercise wheel of its cage — around and around, running either away from fate or towards destiny — but really going nowhere at all. It’s a superlative moment in an otherwise ordinary picture, the kind of bit that catches you off guard and reminds you why even low-rent B movies can sometimes take your breath away — thanks to Duryea.


Manhandled could have really been something — maybe even important — had it been executed properly, but for whatever reason things just didn’t work out that way. So many different planets have to align for a picture to come out well it’s impressive that it ever happens at all, regardless of the talent involved. None of Lewis Foster’s 60+ films as a director are significant, though this is the same man who nabbed a screenplay Oscar for Mr. Smith Goes to Washington. He wrote Manhandled as well, so it begs the question of where in the monumental process of movie-making this came to fall so short of its potential. At best, Manhandled is an uneven yet mildly entertaining film, boasting a decent cast and a few wonderfully evocative moments (including a fantastic man-versus-car chase scene that haven’t the time to get into — the poster hints at it) in a production otherwise lacking a well-constructed noir milieu. In spite of being a “night” movie, it is neither dark nor oppressive, with no pervasive sense of the determinism that characterizes good film noir. Its story is unnecessarily complicated, causing it to feel long at only 97 minutes. It has a good score that often feels clumsy, and photography that vacillates between careful and careless. By the time the thing ends and the killer is unmasked, we struggle not to point a guilty finger at the filmmakers.