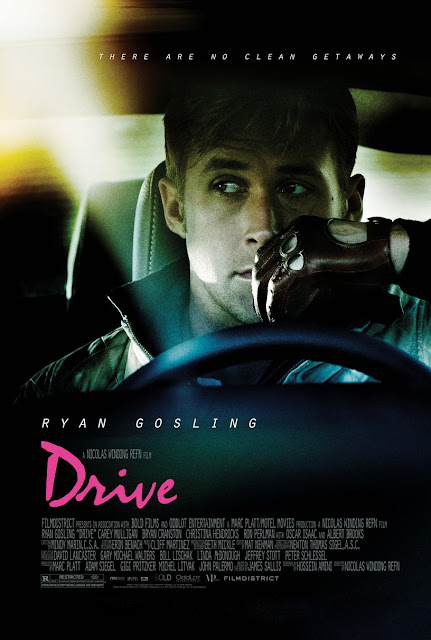 
New films are usually off-limits here, but it isn’t often that such a classicly rendered film noir hits the mainstream. Make no mistake about what Drive is and isn’t: it isn’t an L.A. Confidential-style period piece, nor is it a tribute like Walter Hill’s 1978 cult classic The Driver (though it certainly winks at that film in many obvious ways), and it isn’t a Quentin Tarantino-esque retread of drive-in pulp either. Drive is an exhilarating crime picture — one that marks the continued maturation of an important young director and one that will inevitably push Ryan Gosling’s star one step higher on Hollywood’s A-list. And although much of its appeal owes to the powerfully original filmmaking of director Nicholas Winding Refn (Valhalla Rising, the Pusher trilogy), it’s not an unconventional film, nor is it one that ignores classic Hollywood.


Perhaps it’s best to invoke Quentin Tarantino once again, as the experience of watching Drive is reminiscent of seeing Reservoir Dogs or Pulp Fiction for the first time. The subject matter may be familiar, but the technique is so exciting that while one part of you is wrapped up in the storytelling and performances, another is simply enthralled by the freshness of it all — the vivid colors and the deep deep focus, the lighting that subtly evokes shadows of a black and white past, the ultra long pauses and languid pacing, and the extraordinary soundtrack. And though the film isn’t perfect — few risky films are — it is positively captivating. It manages to situate the central character types of forties film noir in a contemporary Los Angeles setting, yet still evoke the peculiar austerity of the more contemporary crime films of William Friedkin and, yes, Michael Mann. All of this is bound up in a visually striking, and even more powerfully sounding movie, that in spite of its overt sleekness manages to avoid wallowing in postmodern hogwash. The thing has substance.

Drive is neither a heist movie nor a car-culture movie. Those elements are part of the allure, meant to ensure ticket sales in the same way as the casting of Mad Men’s curvy Christine Hendricks — who’s in and out of the picture so fast (albeit spectacularly, and violently so) that if you take a breath you’ll miss her. The focus of the film is Ryan Gosling; and while his casting in a hard-boiled tough guy role at first seems questionable, he makes it work. In the real world we’d raise an eyebrow at such prettiness in a man possessed of the skillset (not to mention the latent ferocity) of the movie stuntman, part-time getaway driver Gosling portrays here. Yet Drive slips this by us by simply avoiding the question of origin: the unnamed driver has no past — we simply aren’t told how he became the mysterious, dangerous, and ultimately sad soul we find in the movie. It’s unclear whether he grew up on the streets, did a jolt at Folsom, or spent some time in camouflage, but regardless we quickly learn that he means business and doesn’t fold under pressure. Some might consider Gosling’s physical gifts a distraction that could ruin the film’s gritty veneer, but Refn embraces them. His cameras linger in close-up after close-up, and although the Driver rarely speaks, Gosling is able to use his face to tell us everything we need to know. And despite being set in the half-light of the Los Angeles underbelly, Drive is also very much a romance, territory in which Gosling is an asset to any film.

More than anything else though, Drive is a film noir — one that proves the enduring power of character archetypes and narrative conventions established well over a half-century ago. Though unlike other modern films that have tried to capitalize on film noir, Drive does so quietly — it uses noir tropes, it isn’t about them. It proves that those well-worn conventions don’t have to be stale — that some of the things that made classic Hollywood crime films so great, if skillfully reimagined, are as valid now as they were then. And like the best vintage noir, it uses visuals to tell the story. (One scene in particular (the elevator scene) took my breath away.) Drive succeeds in this all-important visual storytelling where countless other attempts have fallen short; that’s one of the things is has in common with older movies: it’s look and narrative rely on one another.


Particularly noteworthy is how Hussein Amini’s adaptation of James Sallis’s novel takes on numerous classic character types and successfully tackles them all. The film gives us a pair of urban gangsters much more rooted in vintage noir than those of Scorsese or Coppola — not icy corporate goons or ethic supermen, but insecure sociopaths more in the tradition of Richard Widmark than Al Pacino. Ron Perlman, playing a jewish hoodlum whose greatest wish is to be Italian, delivers everything you could ask for in a workhorse performance, but Albert Brooks is simply astonishing — it’s a shame that the AMPAS failed to recognize him with a nomination, in what is shaping up to be the biggest Oscar snub of the year. Brooks demonstrates that De Niro-like ability to vacillate between affable and terrifying while maintaining a glib, unruffled exterior. His initial impression is almost confusing (especially minus the eyebrows): we know the actor so well, but have no idea what he’ll do with a character such as this. By the end of the film we’re convinced Brooks missed his calling. More than a decade after his brief appearance in Steven Soderbergh’s 1998 film Out of Sight, Brooks finally gets the opportunity to show how much he can do with a distasteful role. Gangsters are Kryptonite in most contemporary crime films — so cliché-ridden that they suck all of the life from a picture. But in avoiding the ubiquitous east coast immigrant mafioso and the west’s beautifully chic hoods, Drive delves into classic Hollywood noir to give us a pair of neurotic criminals who feel both refreshingly novel and altogether real.

Bryan Cranston (Breaking Bad, Malcolm in the Middle) is Shannon, a throwback to one of noir’s most beloved character types: The Loser. He owns the garage where the Driver spends most of his days, serving as Gosling’s criminal pimp and ostensible father figure. He cheerfully limps in and out of scenes, always in a good mood but blind to what’s happening around him — a sad soul borrowed from the pages of Steinbeck. The pronounced hitch in his stride is a visible reminder of an unfortunate life — his luck is so mythically bad that the Brooks character can’t seem to stop reminiscing about it — Shannon even sports a horseshoe tattoo under one ear. If Drive has been made during the classic noir period, Cranston’s role certainly would have been played by Harry Morgan or Elisha Cook, Jr. His luck is that bad.

And then there’s the girl, the one spot where Drive turns convention on its ear. Noir always gives us two kinds of women: the femme fatale or the angel. Drive combines both into one. The actress is Carey Mulligan (An Education), whose form is all sweetheart, but who functions as a femme fatale. Mulligan’s Irene isn’t duplicitous — she’s so angelically idealized that she almost belongs in a Teresa Wright film — but her innocence is so provocative that it compels the Driver makes the sort of reckless choices that are typically machinated by the femme fatale. Nevertheless, what the Driver sacrifices — everything — for a down-on-her-luck diner waitress and her child draws a direct connection with the films of the past and, at the same time, puts a less misogynistic spin on old Hollywood gender roles. Comparisons between Drive and the 1994 Besson film Léon, at least in terms of redemption and innocence, are to be expected, though the latter film, as much-loved as it is, is more thoroughly rooted in stereotype and visual pizazz than it is in the noir tradition.

Finally, in the Gosling character we have a classic and archetypical film noir anti-hero: enigmatic, melancholy, alienated, and alone; yet someone who lives by a rigid code that seems to govern every aspect of his life. When he assures his potential “clients” that as long as they do their dirty work within a five-minute window he’ll stick with them “no matter what,” we are absolutely certain of his sincerity. For him such things are simply a matter of honor. We also know that like other film noir protagonists (and as the title of the film suggests) that the Driver is moving determinedly towards some final, inescapable destiny. All of the wayward ends of his Spartan, empty life are fated to coalesce in some way that we can see coming, but he can’t. The precise control he exerts over his existence, metaphorically expressed in the expert way he handles an automobile, is merely an illusion. We also can’t forget that the Driver is a criminal just like those he serves, and in this film noir, just as in those from long ago, his crimes must be answered for.

See Drive. It’s a film that in it’s brief shelf life has proven to be quite polarizing (it is violent), but it is also original and special. And that’s something Hollywood doesn’t give us much of anymore.