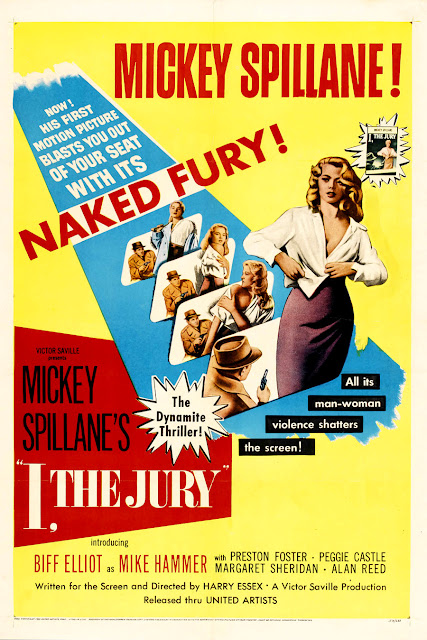 Guys who get into a lot of fights, and win them, have a secret: Don’t hit a man in the jaw, or even on the nose. Hit him in the mouth, and hit him hard. People just have a thing about their teeth. If there’s a character anywhere in crime films that understands this, it’s Mike Hammer.

Hammer polarizes crime film enthusiasts. I eat my film noir hard boiled, so I guess that makes me a supporter. I can understand where others are coming from though: the chauvinism, the sadism, the uncouth vibe of Spillane’s writing is troublesome—Hammer beats women as often as he kisses them, just look at the posters. Many prefer Bogart’s Sam Spade or Dick Powell’s Phillip Marlowe: tough guys for sure, but smart ones who’ll think their way out of a jam before they’ll dust knuckles. Hammer, as his name suggests, simply browbeats and bludgeons until he gets what he’s after. Bogart’s Spade is practically omniscient; despite the aura of danger that surrounds him he sees all the angles and stays two steps ahead. Hammer, a Joe who wears his war experience on his sleeve, has a different worldview and a blunter set of skills. He doesn’t see life’s gray areas and doesn’t really care to. For Hammer, violence is the easiest way to solve problems and overcome obstacles, and since he’s a loner he’s always overmatched. One never knows how things will turn out for him, and, perhaps, that’s what makes the character so exciting.

Hammer was a big screen debutante in 1953’s I, The Jury. Biff Elliot didn’t have much of a career in films, though he had an on-and-off television career. Hammer gave him his big chance at stardom, and his never-was status is an indication of how it worked out. Elliot lacked charisma and he wasn’t a very good actor—lead roles just weren’t his cup of tea. Peggie Castle, who is remembered more for her legs than her acting chops dances rings around him as psychologist Charlotte Manning. By the final scene you are ready to throw an Oscar at her. It’s practically a shame. Biff is visibly trying hard, but his performance is just too one-dimensional to make a lasting impression—all huffing and puffing with a Boston-Irish lilt. It’s fitting that he resembles Ben Affleck.

The film remains of interest however. It’s certainly an oddity in that it was presented in 3-D, though you’d never know to watch it today—the in-your-face shots of most 3-D movies are missing, so it’s unclear what the rush of seeing this in the theater would have been. Nevertheless cinematographer John Alton delivers as usual, with a few iconic P.I. shots (not surprising considering that Elliot makes it through almost the entire film without doffing his trench coat and fedora). Alton won an Oscar the previous year for his color work on An American in Paris, but he was capable of extraordinary black and white photography. He shot countless noir pictures, including the ultra-stylized Witness to Murder. Alton succeeds in creating a cohesive film noir vision, impressive considering he was forced to compose many shots just to hide the film’s low budget. For example, there are zero establishing shots. Most scenes have Hammer coming and going through some door or window, but the camera never pulls back far enough to give the impression of where he actually is. Viewers would be left completely disoriented were it not for conveniently placed signs or plaques that read “Doctor’s Office” or “Police Headquarters.” 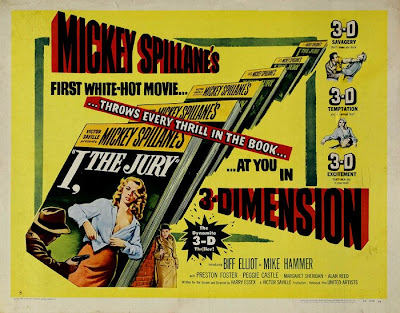 Alton really scores with a few shots, and bookends the movie with crackerjack death scenes. The show opens with a murder that gets Hammer revved up. His pal is shot from a towel-wrapped .45 aimed through cracked-open door. The stiff drops to the floor like a sack of spuds, and the opening titles roll over his crumpled frame, as he drags himself towards the camera and his waiting shoulder-rig. It’s only when he begins his death-crawl that we can see he’s missing an arm—his prosthesis resting on the same rickety chair as his gun. It’s a good opening that ultimately makes the rest of the picture that much more disappointing.

The subtlest use of Alton’s camera comes mid-film, and finds Hammer and Charlotte Manning exiting his drab office building. As the couple approaches Mike’s car a sedan roars by and gunfire peppers the wall behind them. Taking their seats they notice a bullet hole in the windshield. As the psychologist settles into the passenger’s seat, the street lamps cast the shadow of the bullet hole smack dab in the middle of her forehead. It’s one of those shots that makes people fall in love with noir.

The story also requires Mike to trudge around Manhattan and a few rural suburbs. In a clever trick that helps mask the low budget, stills of Christmas cards introduce each scene, the cards’ illustrations featuring of snow covered streets, or “Greetings From…” text alert the audience to Mike’s whereabouts. The cards also reinforce the noir sensibilities of the film—their messages of good will and peace offering stark contrast to the pervasive atmosphere of violence, as does the ironic use of carols in the soundtrack to embellish the murder scenes.

The plot is simple: Jack Williams, Hammer’s best buddy and former brother in arms, has been killed, and Hammer has to get to the bottom of it. Standing over his pal’s corpse, he vows private justice: I, The Jury. Mostly we follow Hammer around greater New York, as he tracks down everyone who attended a party that his dead friend held just before his murder. As Mike crosses off names and the bodies pile up, he eventually finds the person that he’s after and things wrap up as expected. Along the way there’s plenty of head-cracking and rat-a-tat Spillane dialog. Hammer can’t be Hammer without a girl around, and Peggie Castle makes for a stunning, if not exactly authentic mental health professional. She’s out of his league and there’s no spark between them, which is fine given that her affections are a ruse anyway—this is noir, remember.

Make no mistake, this isn’t Kiss Me Deadly. I, The Jury is a watchable low-budget film noir with good direction, A-1 cinematography, and a dull lead propped up by a game supporting cast. But warts and all, it’s also the first screen appearance of a crime fiction icon as important as Sam Spade and Phillip Marlowe. There is something primitive and compelling about the how Spillane’s Mike Hammer puts his head down and kicks the hell out of the world. He embodies the joyously stupid tough guy fantasies of American men, and he even gets the girl. Press play, let’s watch. 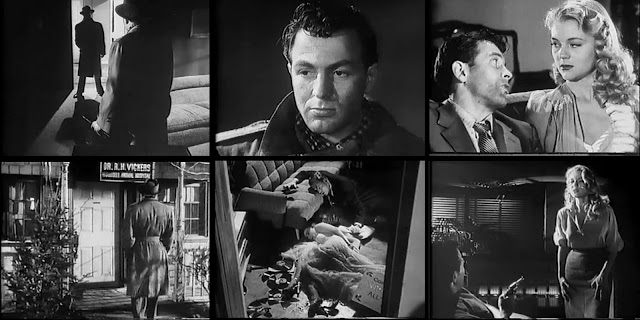